August 05, 2022
Invited out to Geneva to play the resident Swiss national champion, Roger.
Well, actually, my whole family were invited out for a wonderful holiday by Lake Geneva, and while there I played Roger several times at his wife's official residence.
I did take my Samurai, but I decided that for this game I would modify Roger's beautiful Champa army to be Royal Thai (it was the Thai King's birthday that day, so it seamed fitting), which is why you may see some 10mm Samurai units amoungst the Thai, representing devastating charger types.
Despite being a legend, I did manage to out scout and out territory the horde of Mapuche (this version had 16 TuGs). It was a nearly featureless table as most terrain disappeared off into the waterway!
I took all 12 (yes 12) available superior elephants as I wanted to see what they were like, split into 3 x 2 ellies and 2x 3 for bulk. The rest of the the rest of the army was a 6 and an 8 of short spear melee expert foot, a unit of archers, a unot of unimpressive cavalry, three blocks of 9 dev charge foot, and as many skirmishers as I could find. If I had the points, and the time, I would DEFINITELY have taken the fortified camp option the army can have too. 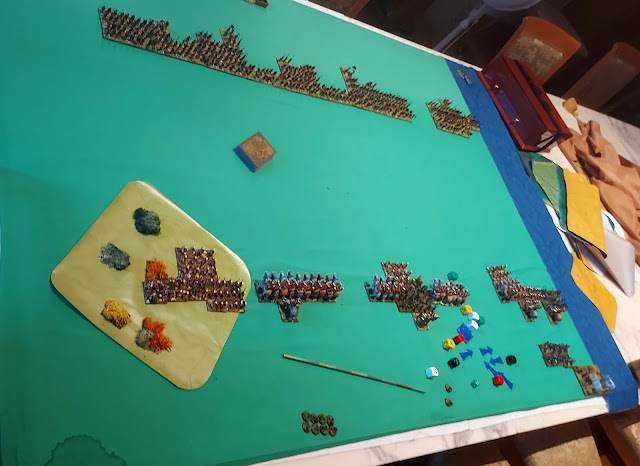 Facing Roger's 16 TUG horde of archers and spears, would it be enough?
Good cards! Thankfully no commands were allied. My plan, didn't have one, just go out and kill stuff to give Roger experience before Britcon!

Sure I had more elephants than that a second ago! Had fun here as Roger's melee expert skill doesn't count vs nellies. 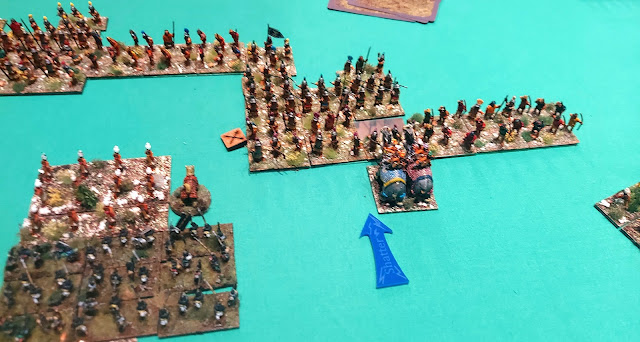 Anyone else spot the carefully laid out hephelump trap here? Soft bait of archers, flank attack laid out behind. Charge almost broke through in one phase though, it was impressive! 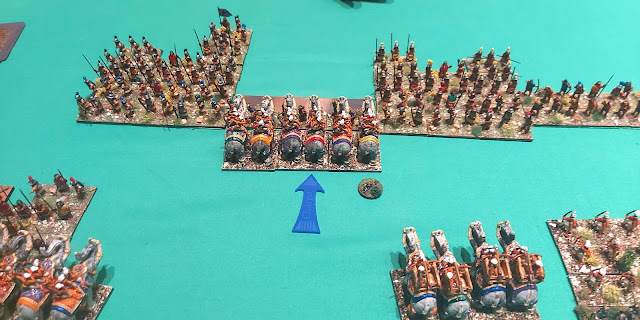 The general scene, there are Mapuche EVERYWHERE! AND I've lost two twos of elephants to combined missile fire and hunting. One of my skirmishers on the left failed to evade, costing me a point (0-5)

The three of nellies breaks through.(2-5) 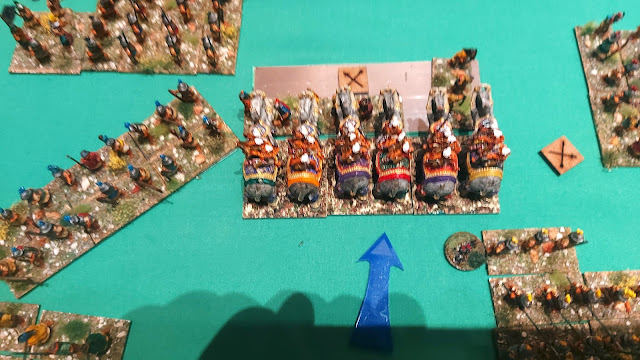 One of the devastating charge units is caught on three sides, but fights hard, smashing the unit at the front, led by Gnesh. 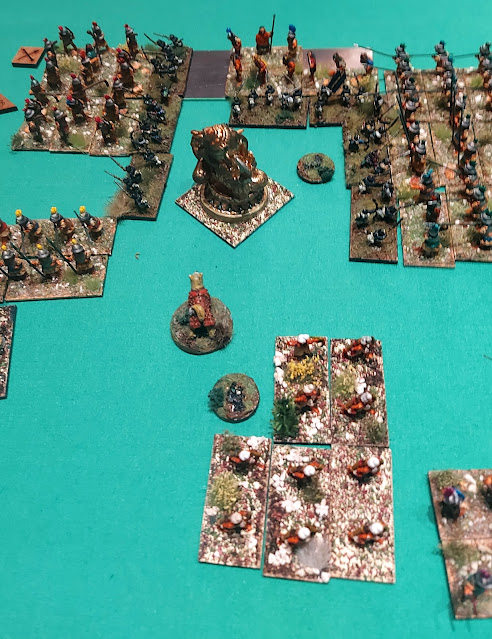 It's a hard fight, but worth it! The unit to their front crumbles and they redeploy outwards to deal with the flanking units. Big units are fun, but will always in this situation be down in melee. (4-5) 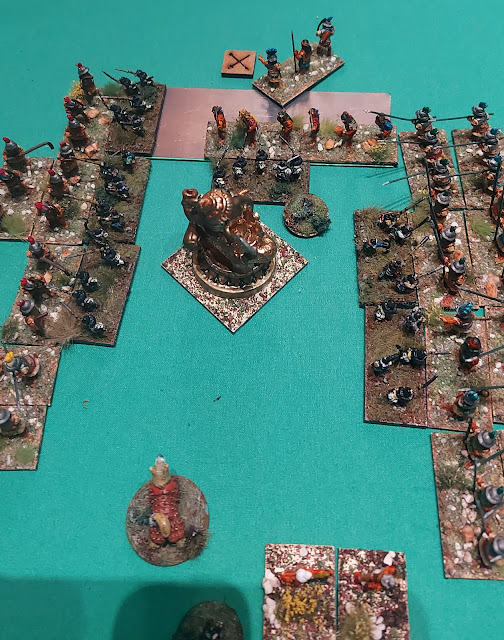 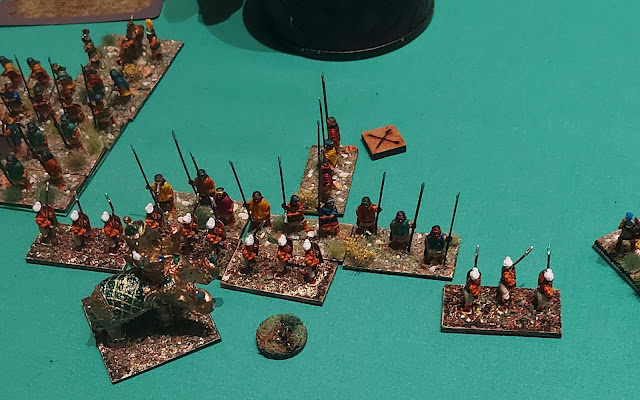 Elephants eye up another unit, while the second guard unit, supported by bows, head off another Mapuche warrior unit (unprotected vs melee experts is always tasty) (8-5) 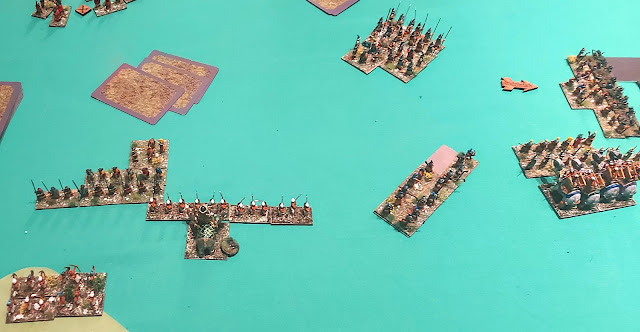 In the centre, the surrounded unit is not giving in easily , one of Roger's spear units has broken through earlier, but he has not had the cards to turn them back to the fight, allowing one of my skirmishers to shoot at them.

Cavalry set up to charge the flank of Roger's warriors, just the turn you DON'T need two white cards on a mediocre general who is already in combat and missile armed cavalry who have to pay to charge. 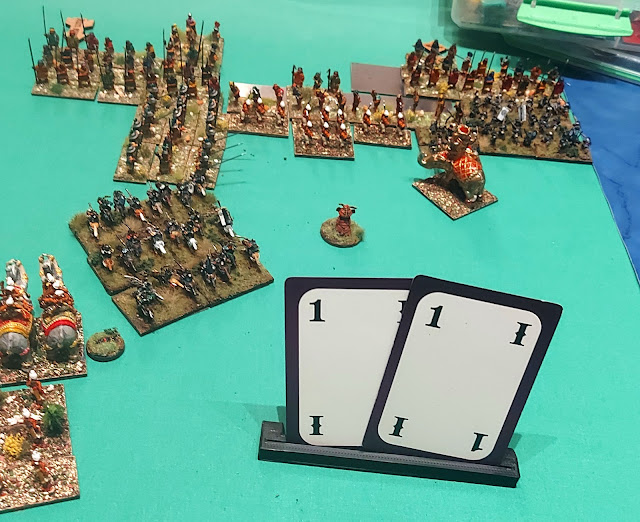 The other general has better cards, elephants vs bows, here we come! 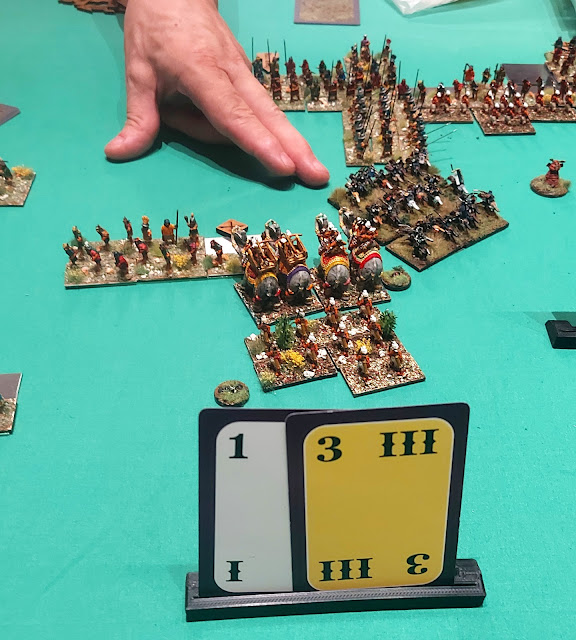 Oops, collapse of the left hand guards does not help my plans (what plans?). (8-7)

In the centre, my surrounded unit fights on, but too little, too late as on the right my other guard collapses (10-15), somewgere I had killed another unit byt forgot to photograph it, but a great game. 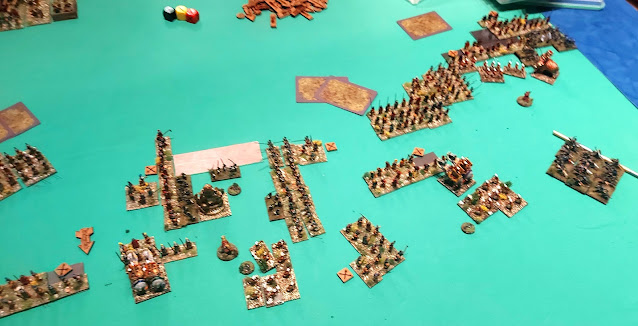 Would I use Royal Thai again? Yes. For a first attempt at a list it did really well. 12 superior elephants is scary. Only issue is travelling back to Switzerland back to use it again!
Deployment, command structure and list would definitely do with tweaking, but a lot of fun.

July 19, 2022
Hi all, As the months go on, I am finding more random stuff that does not fit into any catagory is creeping it's way up to the surface of my lead mountain. I decided last year rather than just throw it back like one of Nobby's escaped socks, I would actually paint some of them.   Random... A WW2 fox in 28mm A sci-fi fox in 28mm and a mage in 28mm Not the best jobs I'e ever done (the lighting was bad today as I had all the curtains drawn to keep the heat out) but they are out the lead mountain!   Next up, an item that fell off the SE face of the lead pile, a 28mm Viking via Hobby Box, basically a palate cleanser between 10mm batches.   Okay, who is up for something REALLY random! Crimson Skies autogyro Apparently they are awful in the game Pink and green dazzle camo was... NOT MY FAULT! Blame Hammy! Even has room for a passenger/gunner? Vought Raven on approach It just needs a billionare playboy/superhero
1 comment
Read more