15mm ECW army from a friend.

A project that had a lockdown start. A great friend who moved to France a good decade ago to very successfully restore mandolins, was selling on some stuff. Among it, an ECW army bought some point in the late 90s for DBR but not really used. It was undercoated, had the odd bit of paint here and there (which I have kept to honour his schemes), but apart from that it was a blank slate.

With the advent of ReG, MeG's Renaissance spinoff, and a competition at Boards and Swords in November, for which I am also painting Manny's Catholic Germans, who was I to say no! Quick converstation with Iain at Flags of War, and he kindly rescaled some ECW banners for me too.
The bulk of the army is painted, just needs basing and standards adding now. 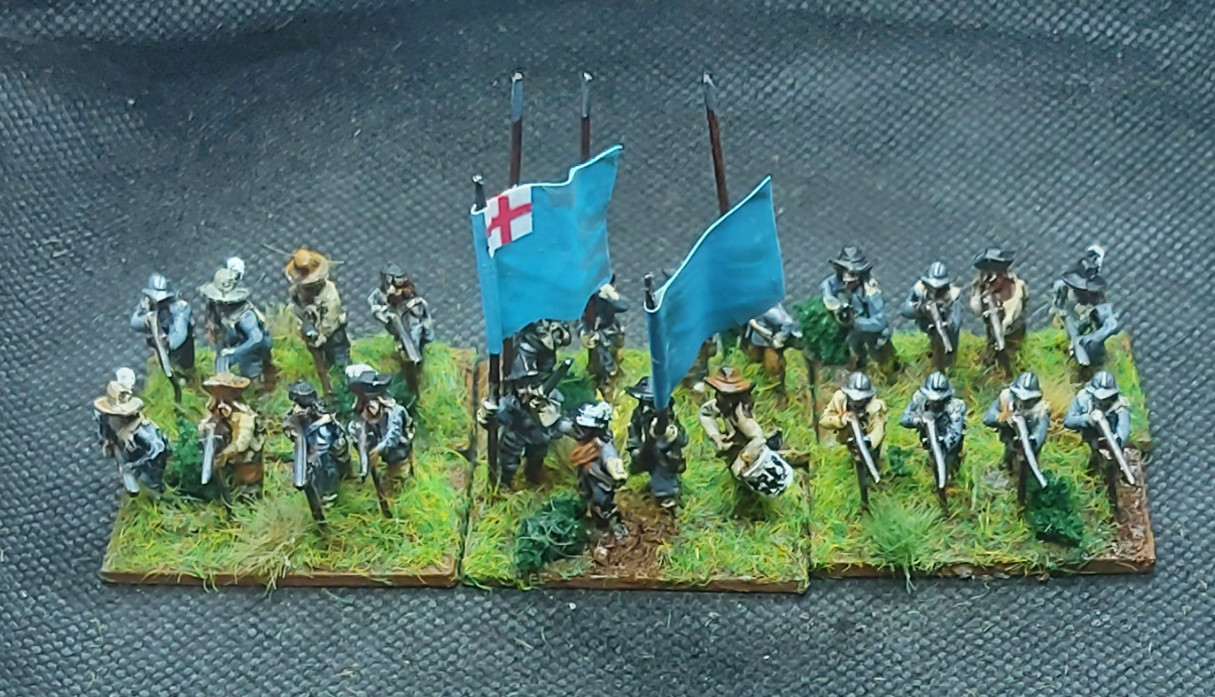 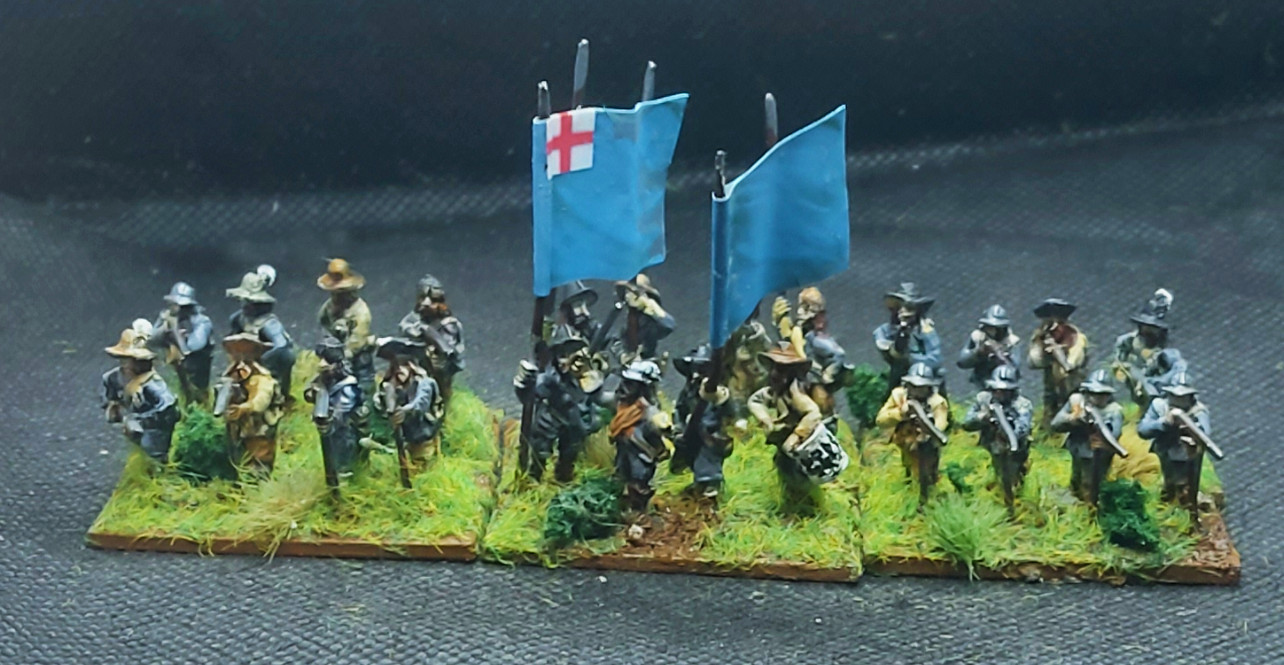 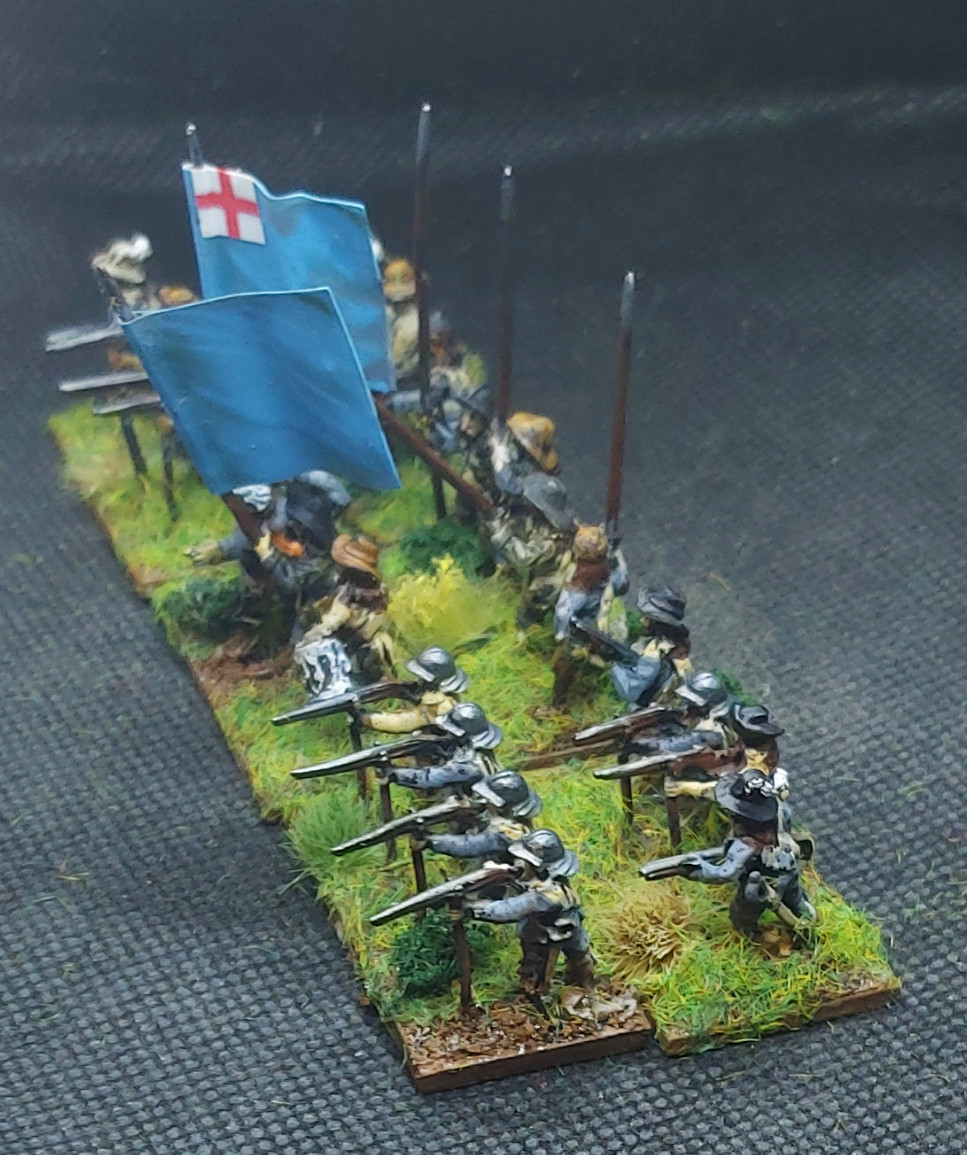 I admit, I was planning a 10mm ECW force, but getting these classics on table was even more satifying. 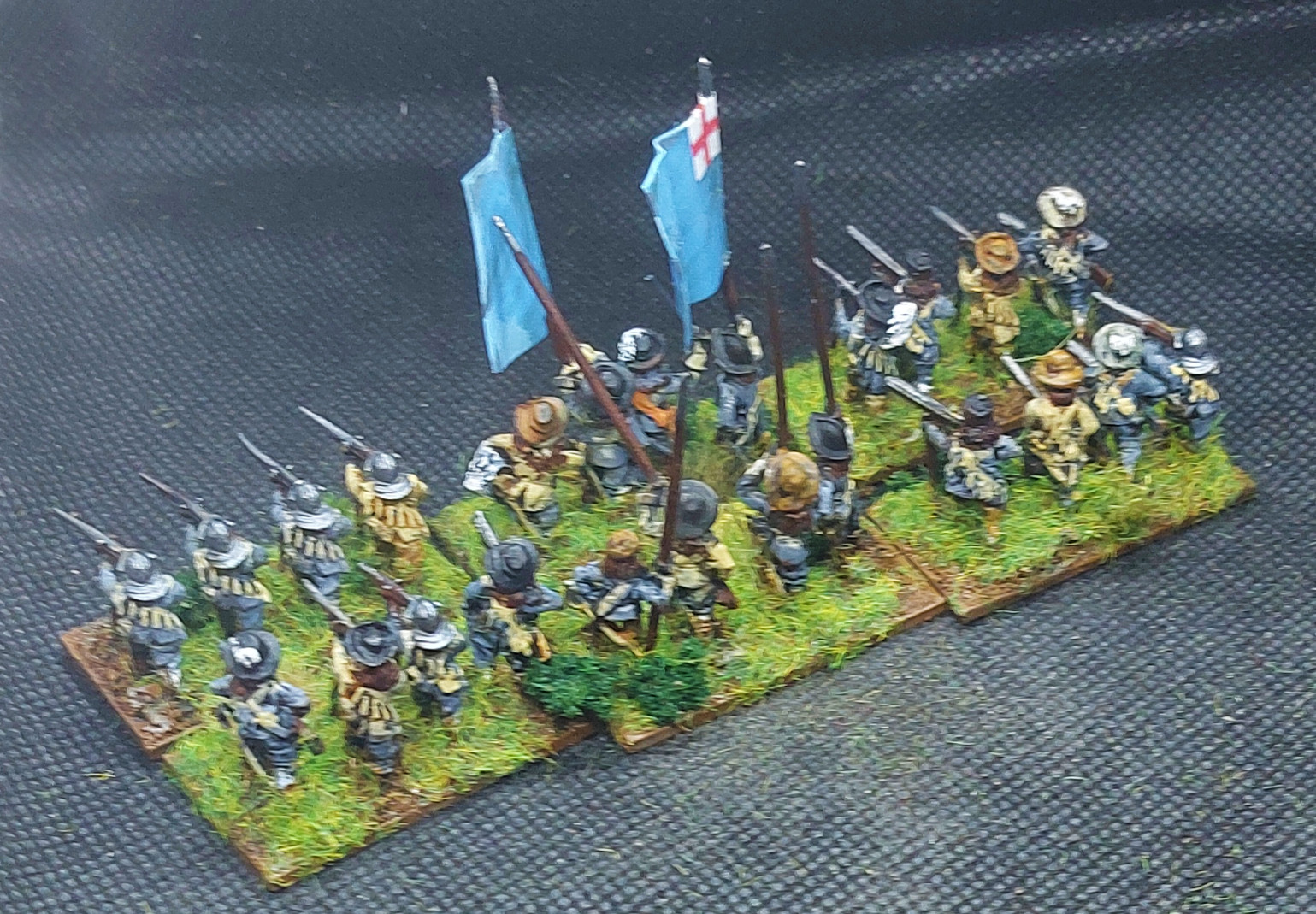 Blues (I know the pikes are a bit wibbly, but being almost thirty years old, it's okay, some were bent double when I got them, and I am straightening them over time) 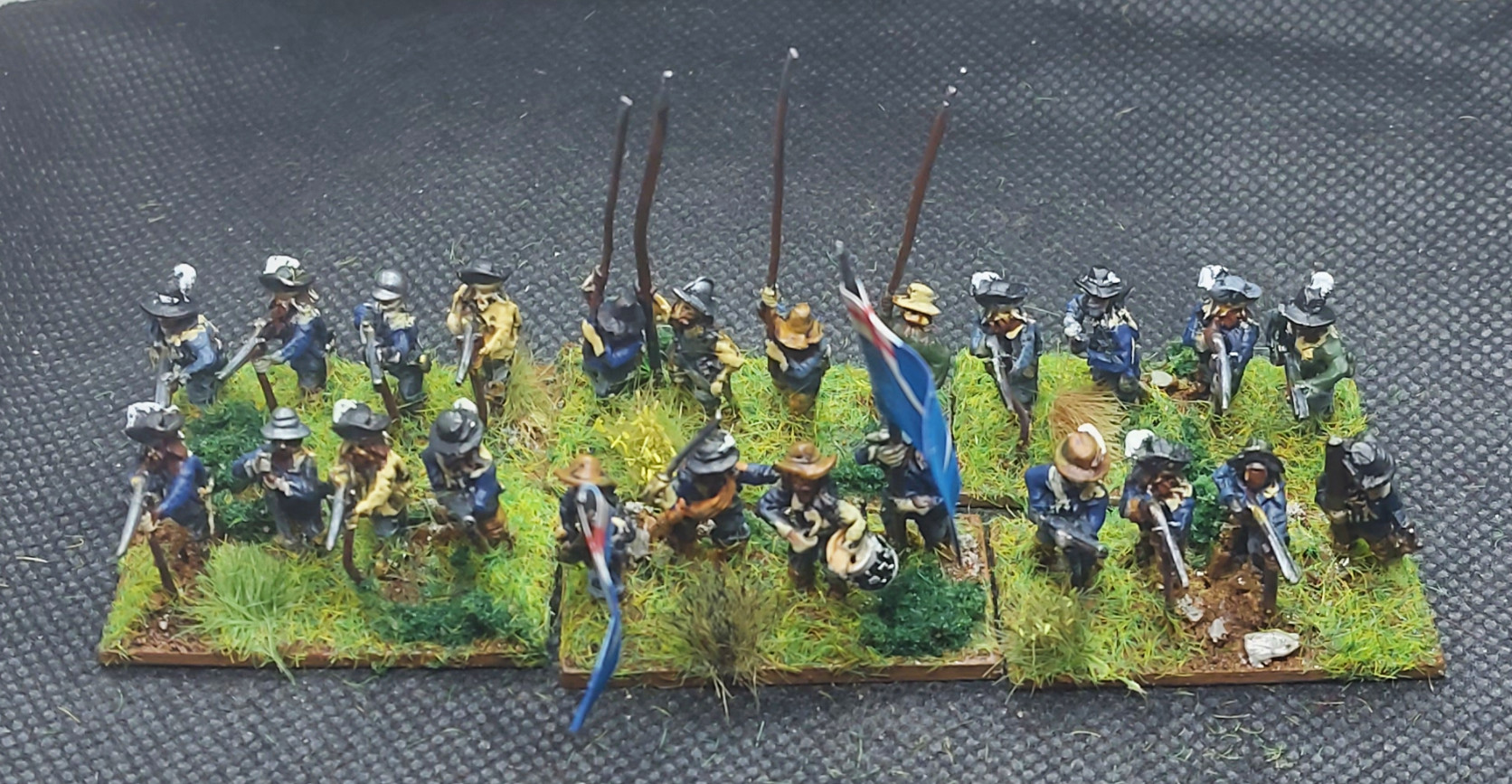 Realised after the two test games I have had, under certain light the greys and blues become almost interchangable! 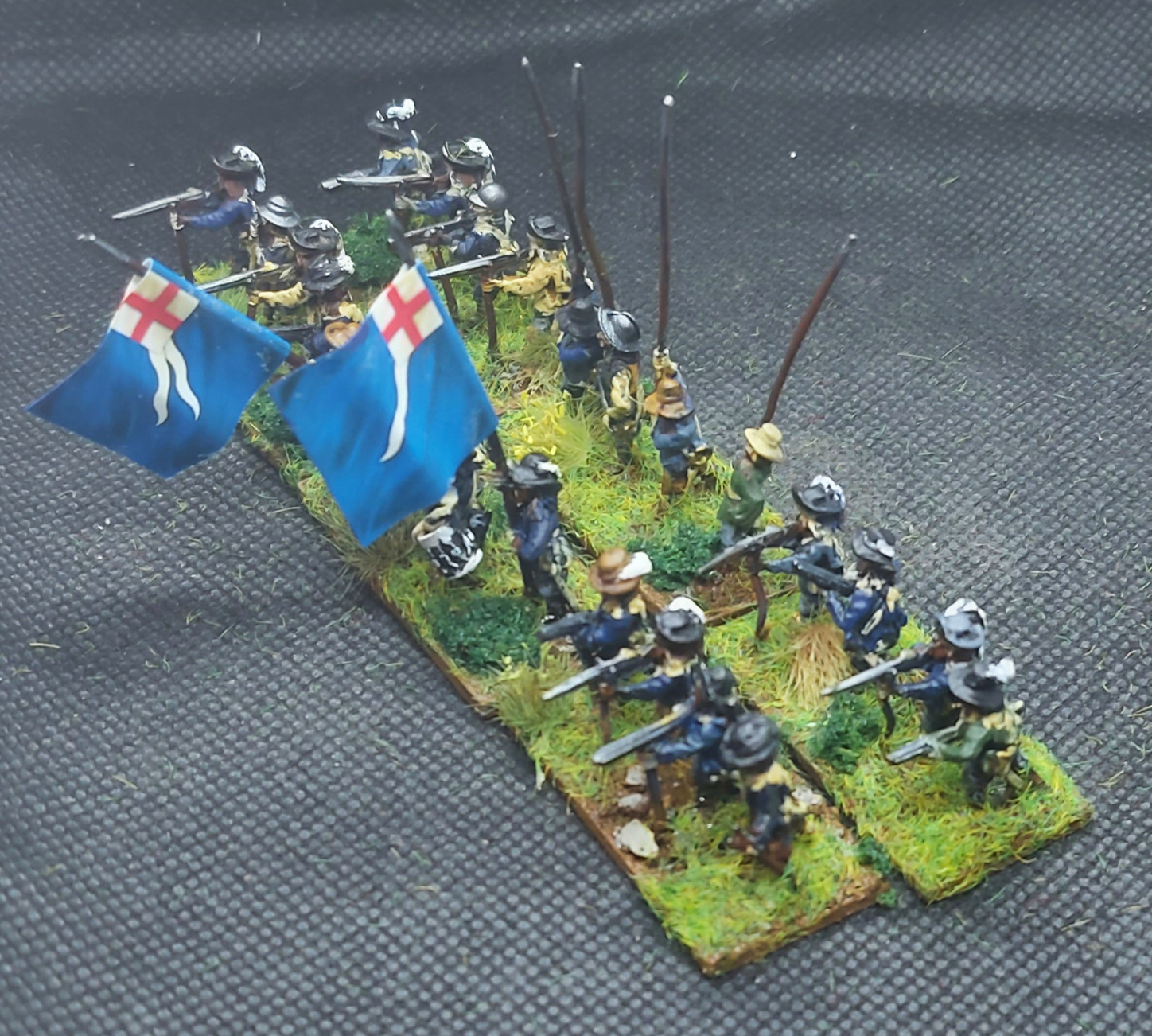 A few mixed jackets helps the 'not-professional' look of them 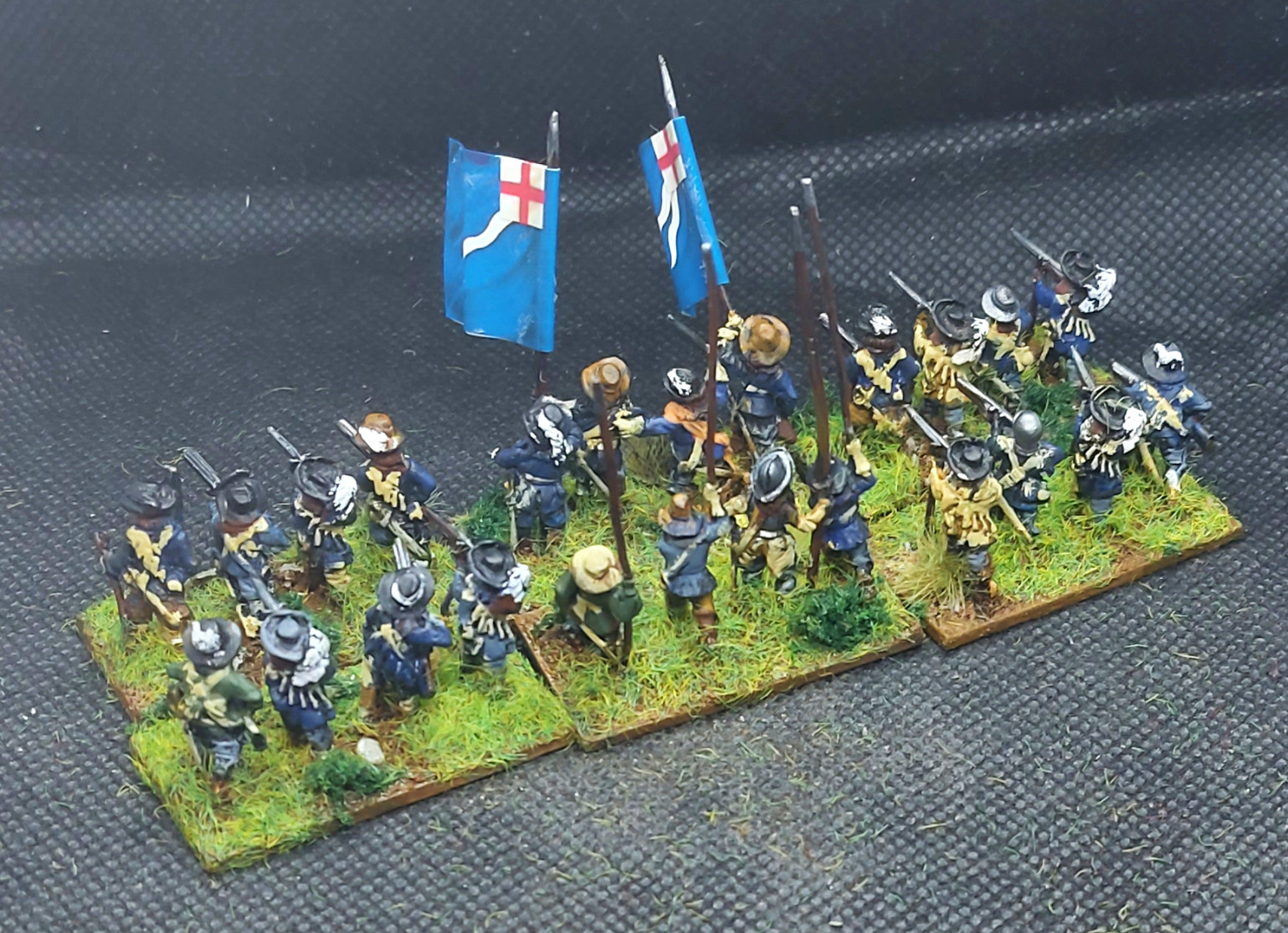 The greens, who have pretensions of being a good, uniformed unit (I literally picked up six bases each time from the box, if I got matching kit, it was a good day), note the officer transfered from the Blues. 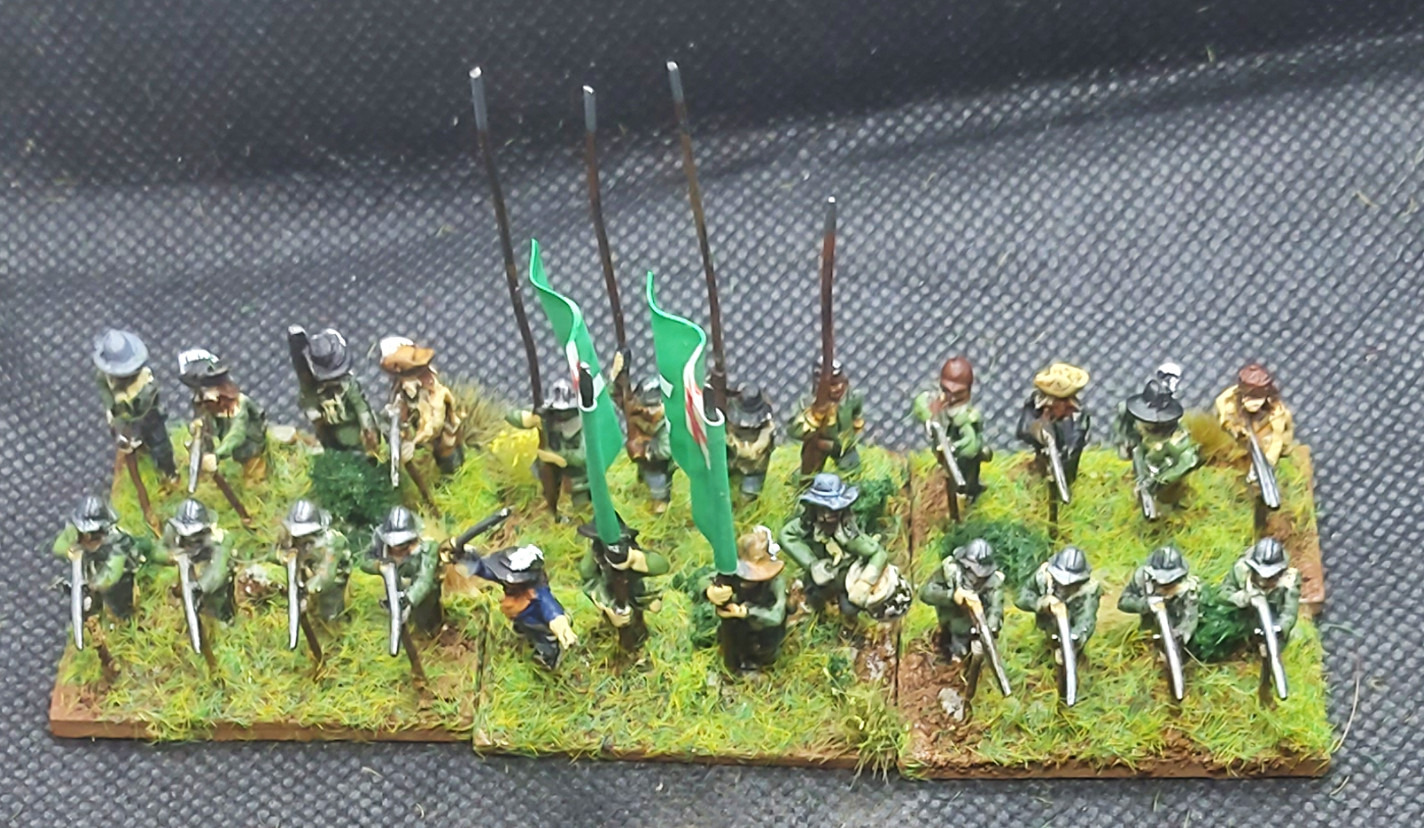 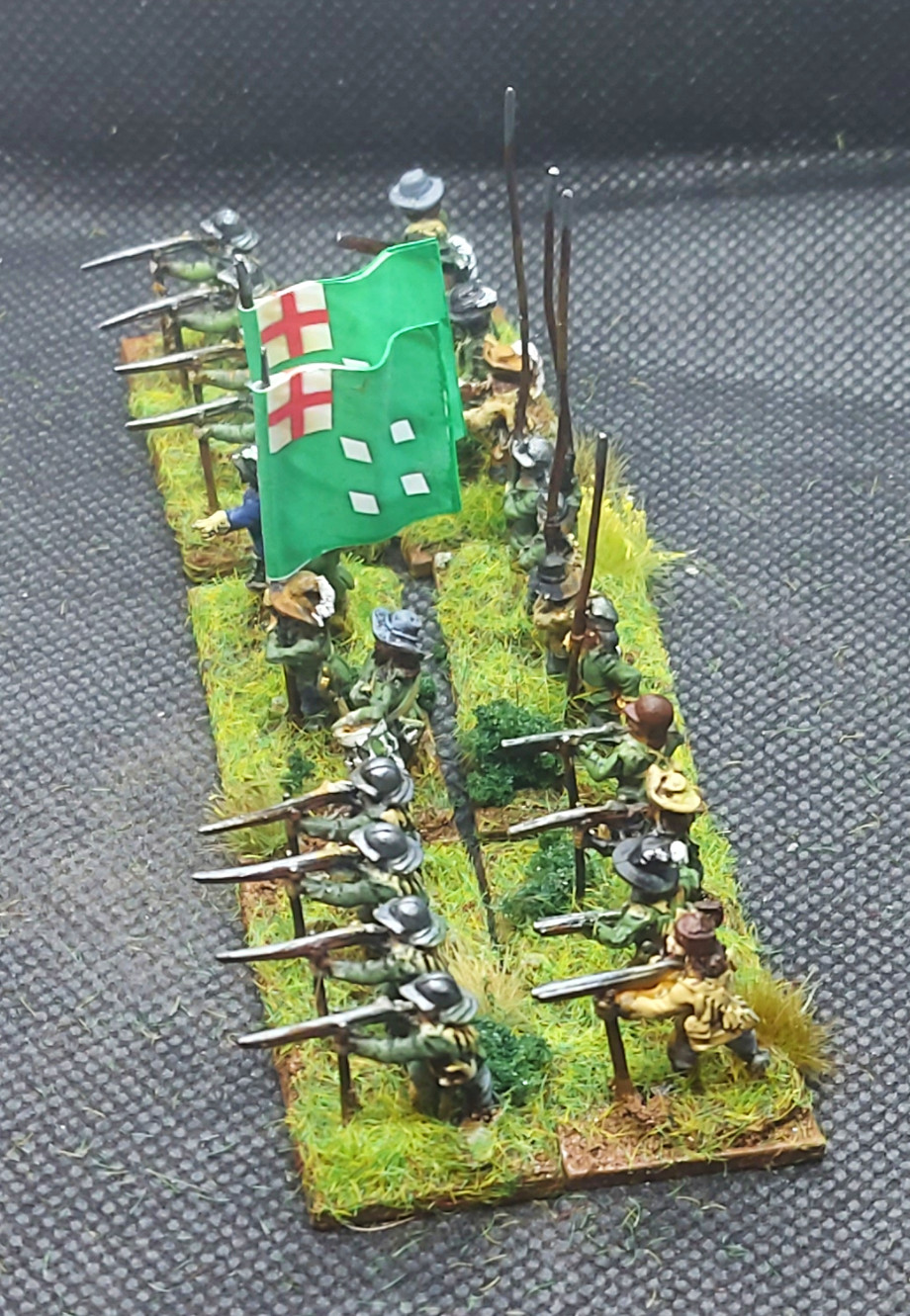 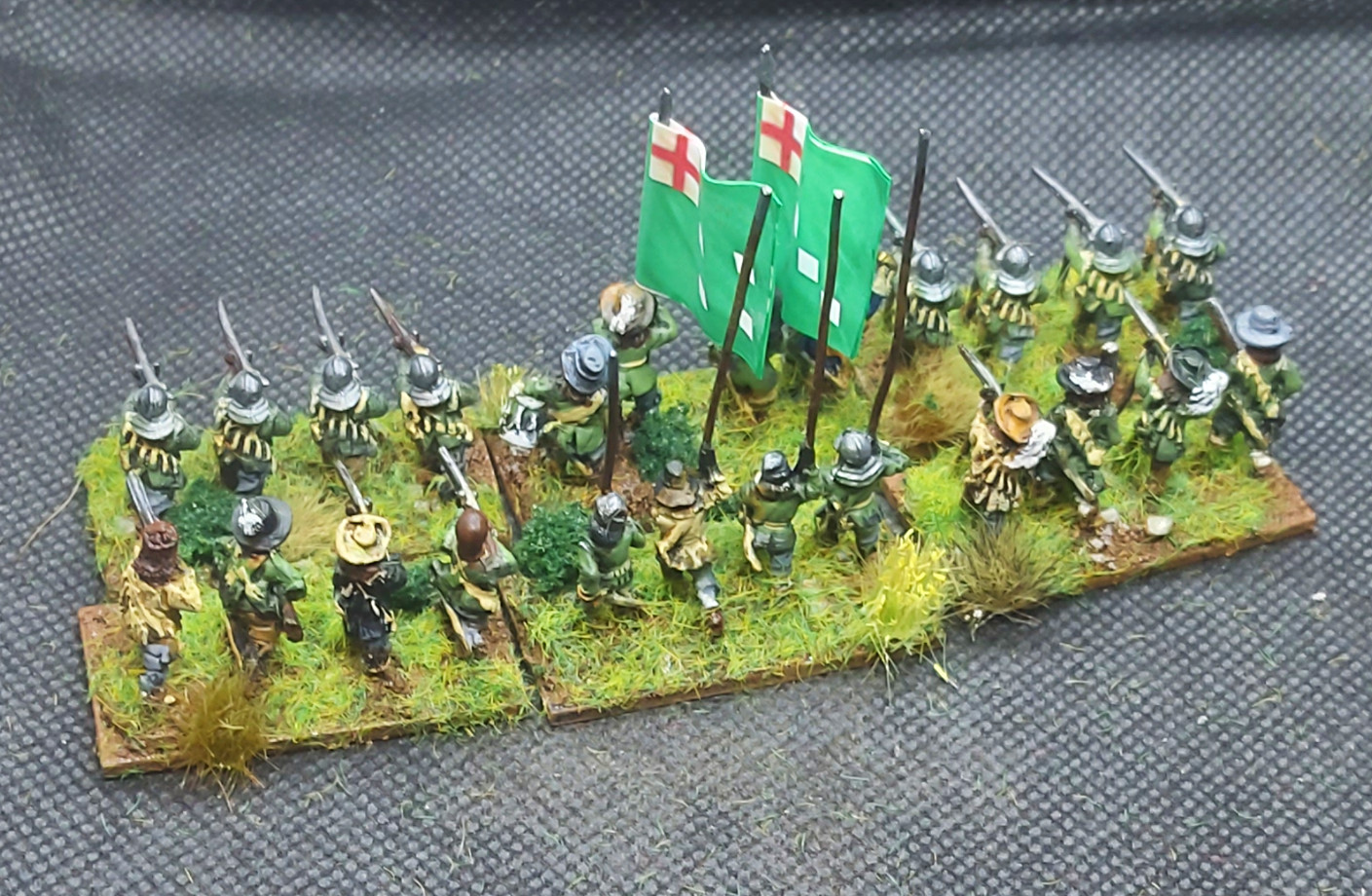 More wobbly pikes. Their new, deeper, box will stop that happening in future 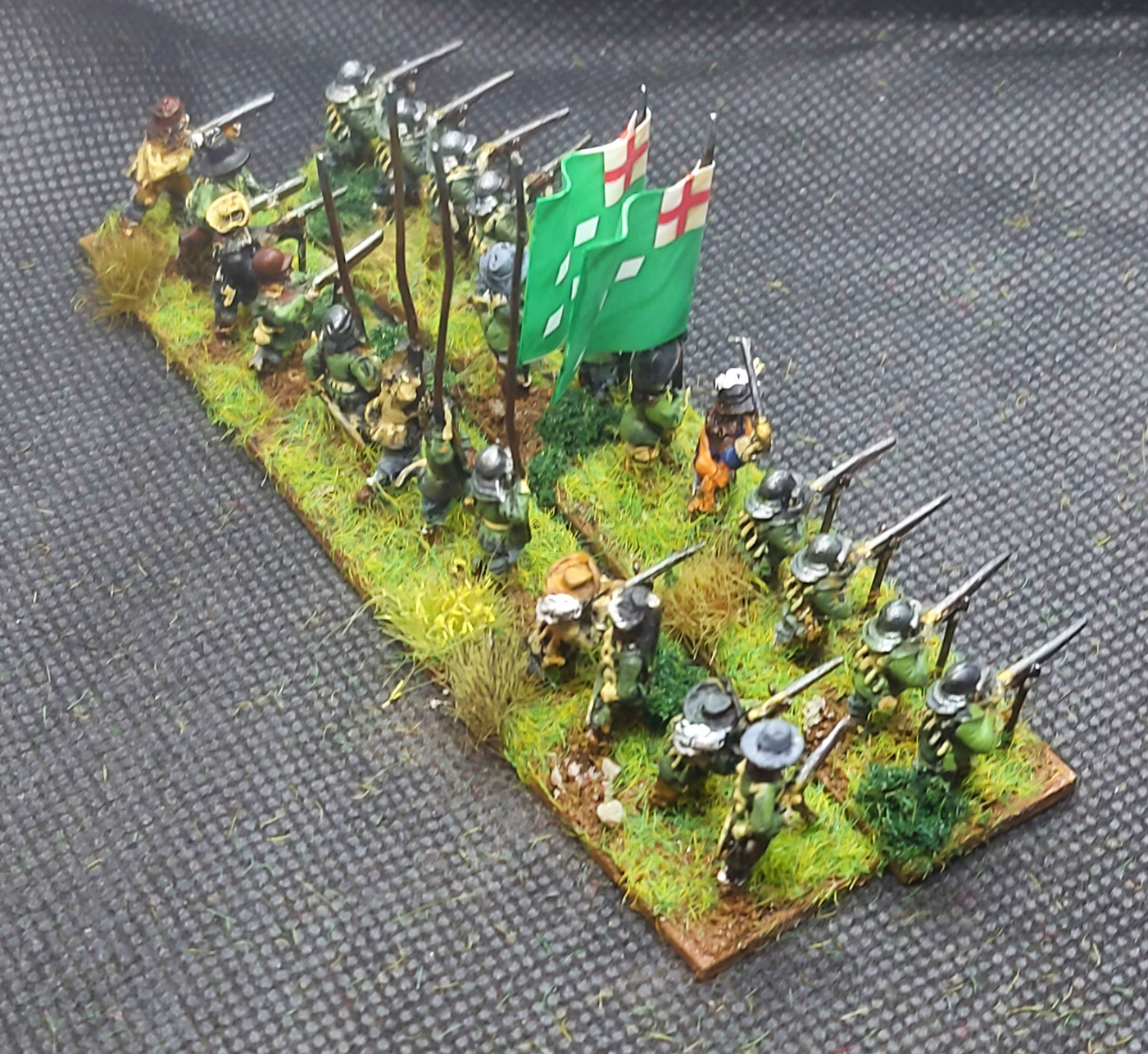 The yellows, someone has cut down their pike for kindling! 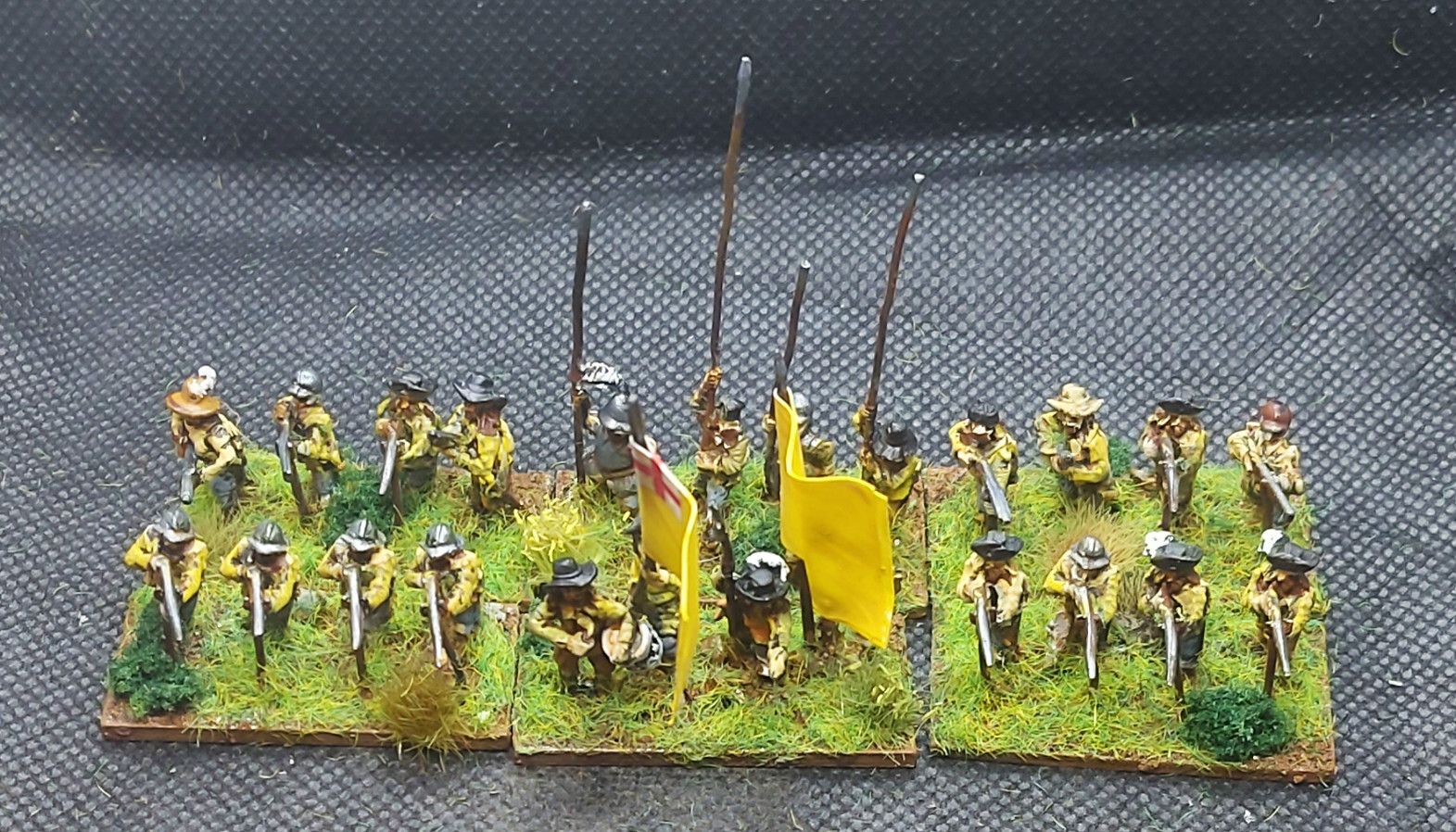 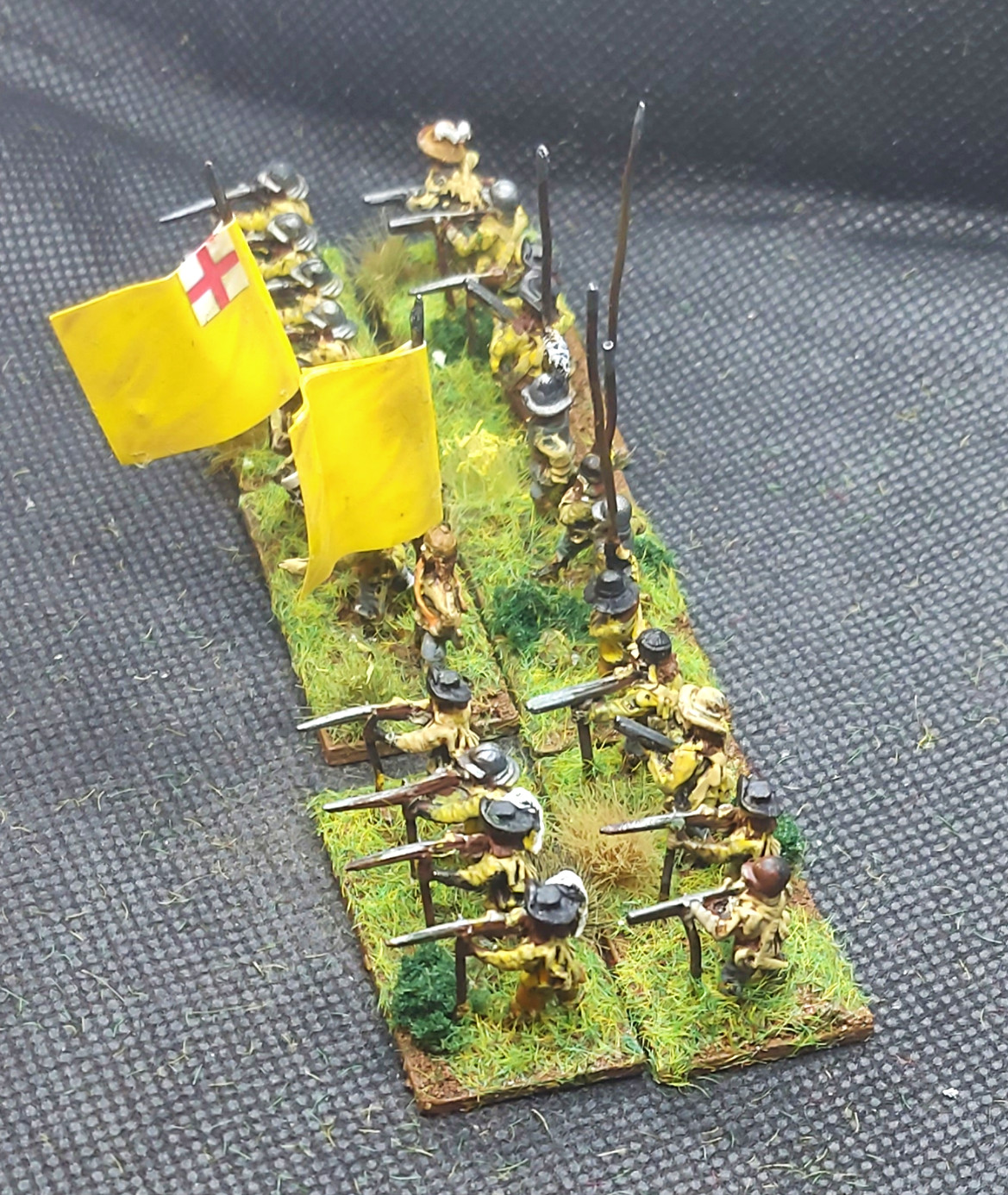 I swear I edged that flag! 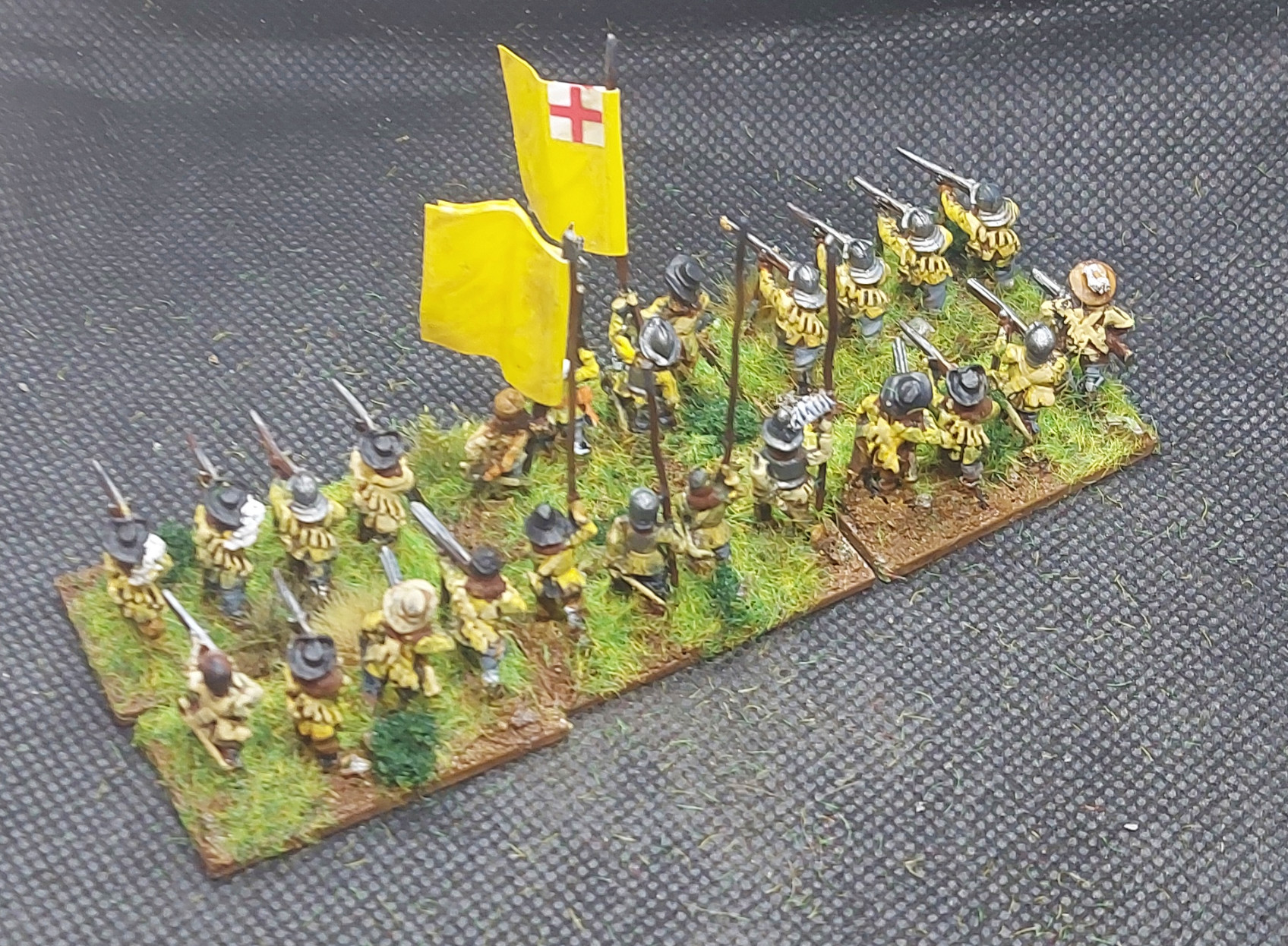 May 13, 2022
A lovely chap cannot paint any more, so he has asked me to paint items to help finish his collection. I take NO credit what so ever for the amazing paint job Tom put in on these 40mm Hinton Hunt Hussar figures. My role in these is simply basing them up to show off their glory. Where possible, I tried to save Tom's Hinton Hunt labels and reattach them to the display bases   They really are magnificent   Mixed bag for Tom this time, which finishes * off most of the 7YW for him. Hungarians from Austrian forces Back view German Austrian units Not sure what they are waiting for Godot? He'll be along soon... All four together Russian Butyrskiy Infantry Advancing Back side Russian Grenadiers Guards Back view Off we go Russian Observation Corps, Grenadiers on teh left, 3rd Musketeers on the right It's a difficult advance Like the motion on these Storming something? All the Russians Swedish Älvsborgs Infantry Eyes right Headin
Post a Comment
Read more

April 19, 2022
Hi all, As the months go on, I am finding more random stuff that does not fit into any catagory is creeping it's way up to the surface of my lead mountain. I decided last year rather than just throw it back like one of Nobby's escaped socks, I would actually paint some of them.   Okay, who is up for something REALLY random! Crimson Skies autogyro Apparently they are awful in the game Pink and green dazzle camo was... NOT MY FAULT! Blame Hammy! Even has room for a passenger/gunner? Vought Raven on approach It just needs a billionare playboy/superhero to pilot it! Shiny! It's like the Liberator, which way does it go? Yes, it's a pusher plane! Many guns   28mm Count Brass and Olodahn the archer,  Tartar giant by Eureka models for my Provancal/Karmarge forces. Swinging hard Olodahn is a giant btw! Is Count Brass compensating for something?   Duke Dorian Hawkmoo
1 comment
Read more

March 18, 2022
Last year Adrian replumbed my house, in return he gave me a few boxes of PSC Goth and Huns to paint. Almost a horde. Again in muted colours as lower status troops. 8 bases of Huns for Adrian.    Someone is borrowing this weekend, and Adrian can't make it...  In loose oorder so that his others in skirmish can allow him to be flexible Side on Other side Player's eye view   A tent that got delayed due to low stock...   Got the army finished*! *Finished - until he gives me something else to paint! Light horse - Adrian was collecting them that night, so the pva was still wet on the shrubbery. Most muted of all the cavalry due to being less wealthy. Fast, deadly at range, not much good in a stand up fight! Top view The camp, arrived on Monday, finished last night! Mostlly Beuada Pork dinner anyone? Think it's done! Two tents, does it make a camp? Barrels, sacks, pots, pigs do!
Post a Comment
Read more