I never know how to spell that list title! Thank gods for cut & paste (but now I have an awful craving for fish bases pink snacking materials). Dik had said he wanted to use his Taramasalata Spanish, so my only real choice is my Tudors. My list (unchanged since getting drubbed by Neil) 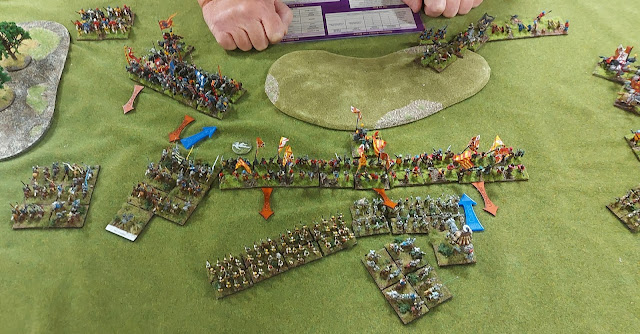 With both generals being competent, Henry managed to not only invade, but strategic intercept and outscout the Spanish! The terrain became dende mountains with secure woods on the left flank, and wine gums to share.

You join us two turns in, while my Welsh spears are entering into the village to commence house-to-house fighting against the Spanish PROTECTED (really, look it up). The pikes and bills moved inextrobly towards Dik's firearms-armed-melee-expert-pikes (squeak, nasty). Dik's jinettes start the process of getting around things and shooting them (including the Welsh as they go past on the charge). All five pieces of artillery (two of mine, and three of Dik's) basically did nothing, all game. 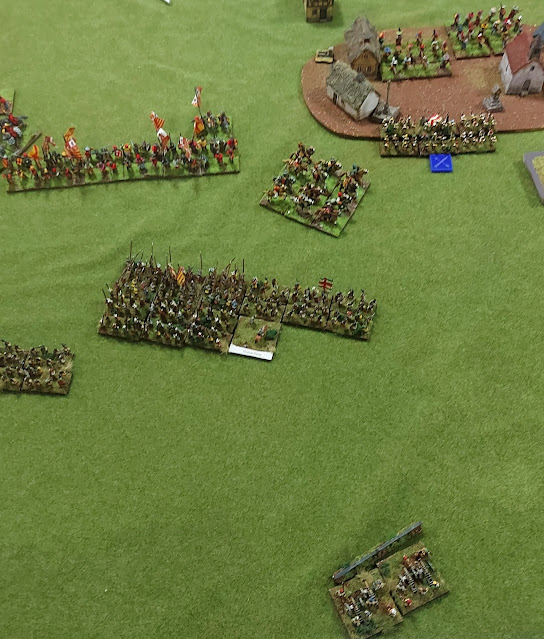 In the centre, and on the left, both sides advance. My eight of longbows faces off against two pike blocks, rapidly backed up by the fully armoured men at arms. Shooting the gap is the elite 4 of English knights with the intent of countering the Spanish knights that were approaching from Dik's centre. My powerbow pick on the end  Colunella foot, or not! 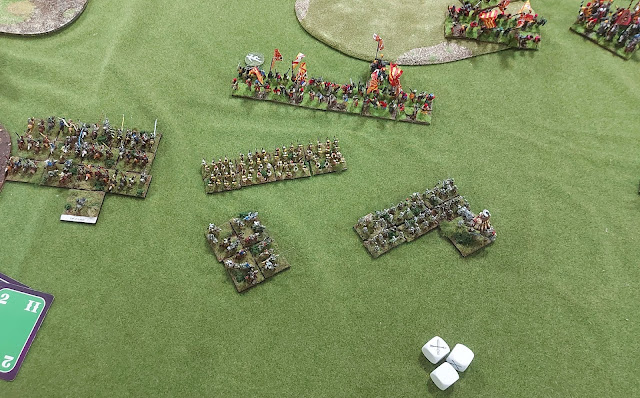 Long shot showing the left and centre, with Dik moving units and another two Colunella approach my pike to the right while my two units of bills in support. 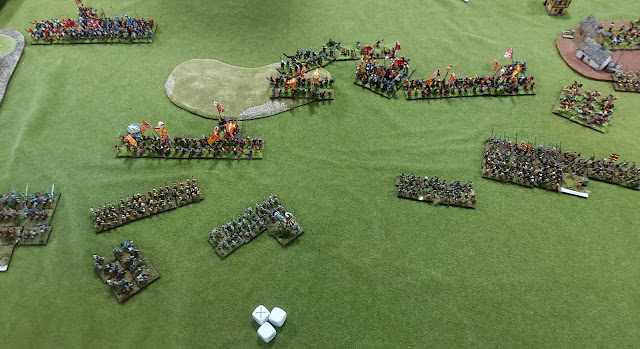 Do we think that's enough charges for one turn? My knights hit the flank of a Colunella, while Dik puts his two Papel knights into my knights and into my Demi-Lancers. Instead of shooting me with firearms (double slowing nastiness) he decided to charge my men-at-arms and powerlongbows, However, due to charge order, the left hand Colunella was stalled by the knights and the powerbow shots.

On the right, the left hand bills and the pikes charged, including the flank of a Colunella, which also puts them in range of a second Colunella, while in the village the Welsh charge again while the Jinettes do, well, not much! 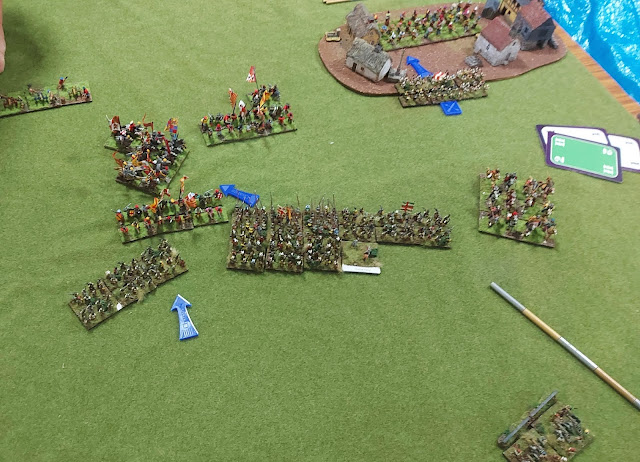 The knights clash and although we lose a base and a half of casulties and the Duke of Suffolk perishes (and he was only 85!). At this stage in the battle, my dice were definitely on strike, I could not hit a barn door with a banjo! My demi-lancers cause a kill and a wound, but suffer two kills in return! 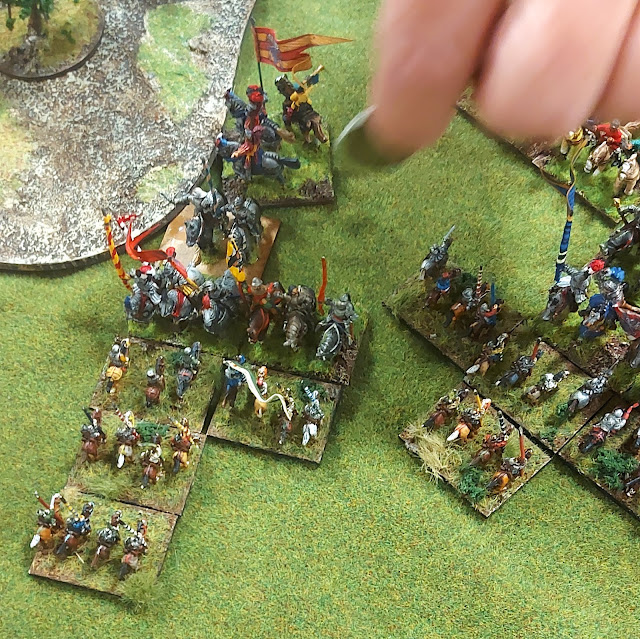 I was causing wounds in the foot, but I was not getting quality hits in.

Over on teh right, I was also failing to land the hits, either in the village or against the Spanish pike. I killed two bases for the loss of three of mine!

After many, many turns of not doing anything to each other, the combined shooting and melee prowess of my knights and men-at-arms broke a Colunella (2-0). 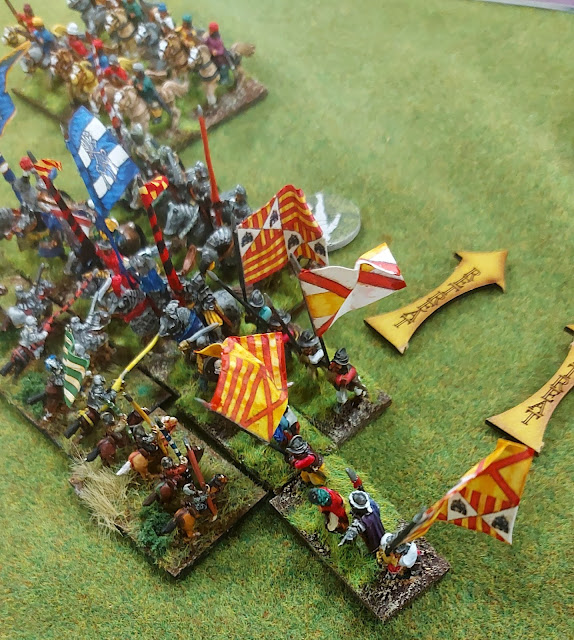 But at the dame moment, my bills disintergrated under the combined weight of two Colunella (2-2). 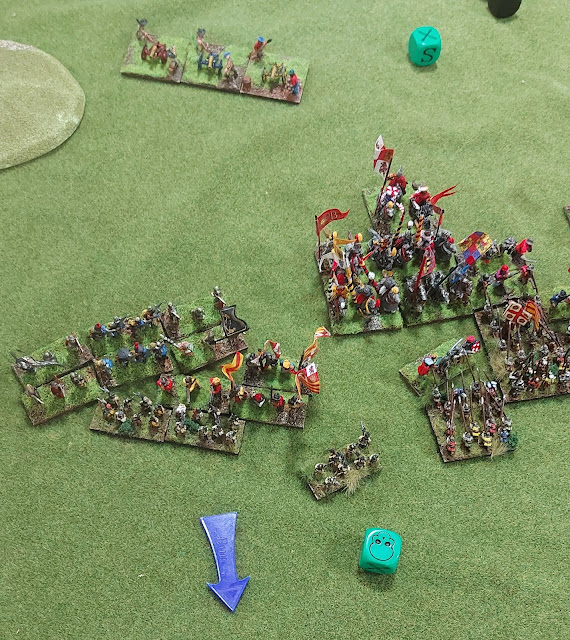 Leaving an unfashionably large hole in my centre! I tried plugging it with my superior knights while my bills snuck round the flank of another Colunella by the village. Is it too late as two Colunella pursue my broken bill? 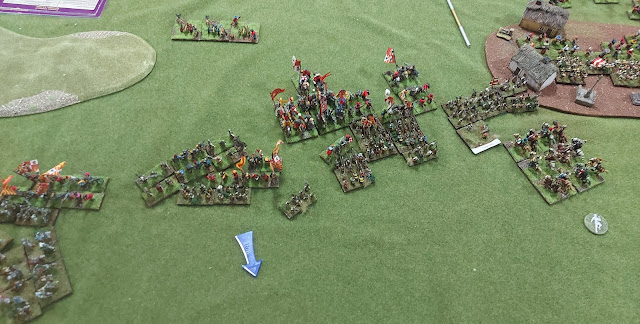 In an effort to stop my household knights sneaking round the line, the Spanish Colunella charged them! The result was not pretty for the pretty pikes! 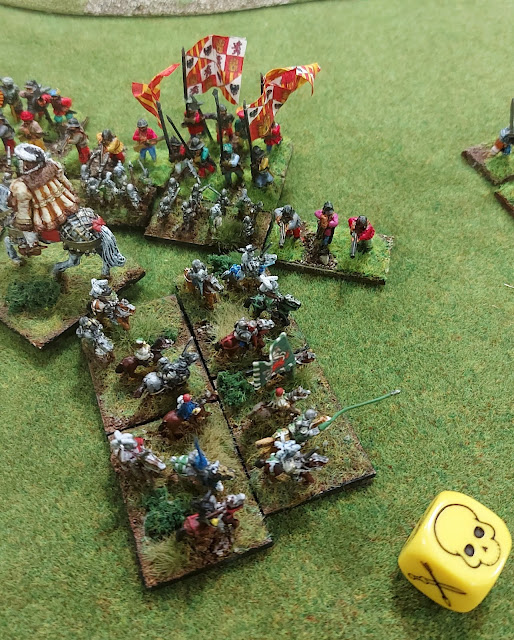 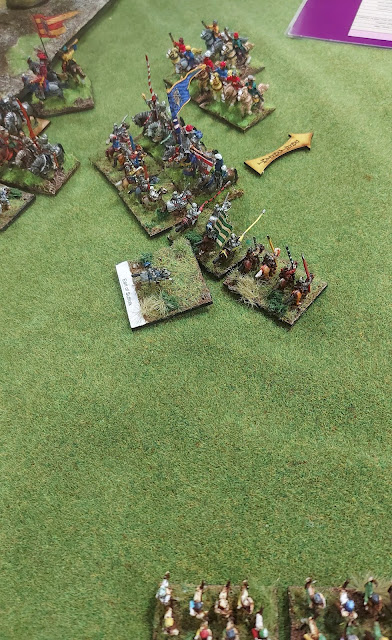 Not that amusement did not last long before turning to cancern as the Demi-lancers broke under the weight of Italian steel (and I was through to the chewy underside too!). 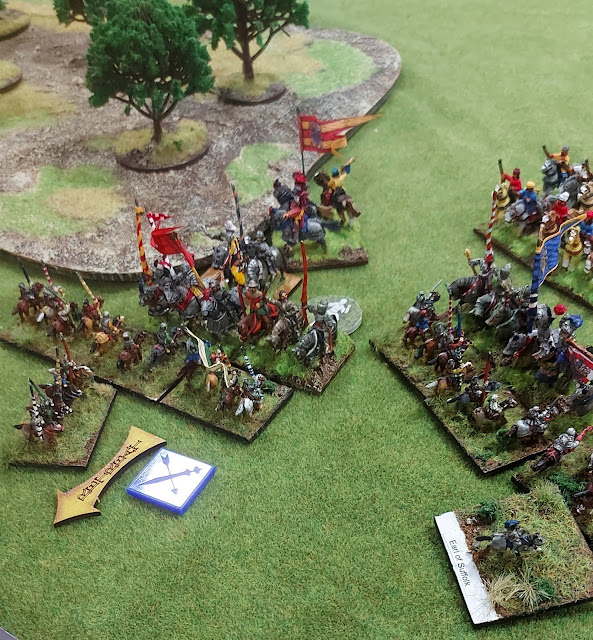 Dik's deadpile grows, while my spears fail to wade through the Spanish skirmishing handgunners. Our flank charge on the right hand Colunella had killed a base, and now it was looking shakey indeed. 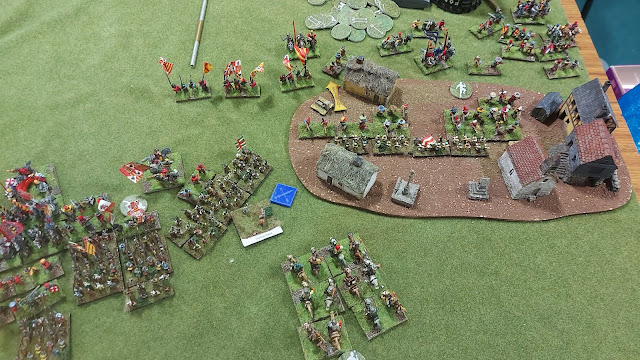 There really is not much left on the left after Dik lost two units and I lost one, I push his skirmishing horse back, and my powerbow wonder whether they can react in time to the Papal knights. 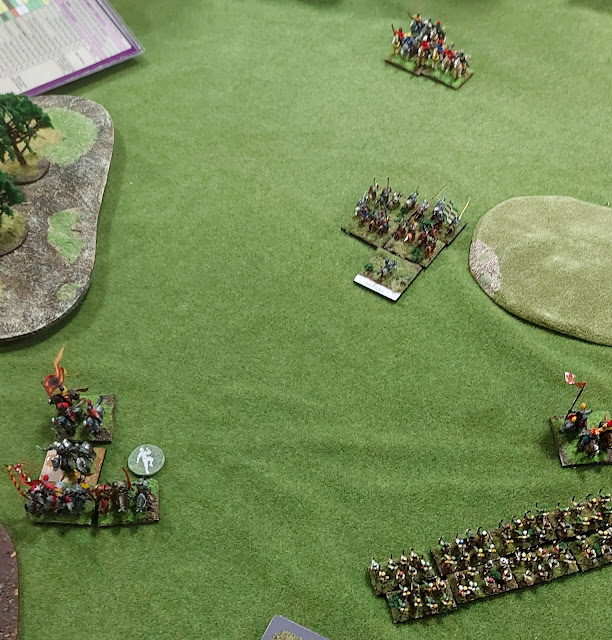 Success comes in unusual places, as my men-at-arms, combined with the Household knights, chew through two more Colunella units (8-4) leaing me with an open centre all of a sudden and my househld knights charging pikes! Not quite where they want to be. On the right, a Spanish skirmisher routs (9-4) and the Colunella previously hit in the flank by my bills also collapses (11-4), this ripples into another nearby Colunella as the Spanish army routs (15-4).

Top quality game, and felt a lot closer than it was. I did manage to secure 3 flank charges on pikes, which helped me an awful lot (if my die rolling at that point had not been so poor). My Men-at-arms and longbows did well, but the stars were the knights killing their opposite number and a Colunella unit.

October 09, 2021
A lovely chap cannot paint any more, so he has asked me to paint items to help finish his collection. Next batch for Tom Kingdom of Naples - Real Corse Regiment - 1st Regiment - versions 1 (1806) & 2, (1813), 2nd Regiment, 3rd Regiment, 4th Regiment. Going that way Rear view Going t'other way Kingdom of Naples - Guard Grenadiers Voltigers and Velites (1813) Rear Kingdom of Naples (1811-1814) - Regiment 4, 5, 6, 7 (version 1), 7 (version 2), 8, 9 Off somewhere? Back view Back again? The whole batch Top view  Tom asked me to base up the last batch. Generals 28th and 33rd Ligne based up. Rear view The four Italian Regiments And another batch of figures for Tom Dismounted French Dragoons 1st, 7th, 13th, 19th and 25th Naples Sappeurs from Regiments 1- 7. With 1811 varients in rear of Regiments 1-3. These hae been Tom's dream project for years, and the research he did into them are unsurpassed. I hope I did them justice for him. Top view General Napoleon in 1796 Hu
Post a Comment
Read more

June 12, 2021
Andi is an old, old friend, back from the days of DBM, so 1990s! He asked me to paint his airborne division for him, thankfully one brigade had already been done, but there are still plenty to do, and an armoured division, and an infantry division too. 2nd Airlanding Battalion done for Andi's airborne division. One more to do, then I need to finish the armour and infantry. Top view A. B, C & D Companies Top view A & B close up Side view C & D Companies Side view HQ and support stands Top view Pioneer stand worked well 1st Airlanding battalion done now. HQ elements. Face on. Top view A, B, C & D companies Must order some extra bases... Decent formation, now there's two more the same size to do. The whole formation, it's quite big I suppose. 24 bases, in Spearhead, of decent foot. Brigade HQ elements, because I could. Pointy bloke is in charge... With the Glider Piolt regiment in their tray. 2nd Para done. HQ 3rd Para Top view Recon HQ Support wea
1 comment
Read more