The Freeferrets sat at the bar enjoying many well-earned drinks, each stoat, weasel and ferret had wry smiles on their snouts as they thought about the day's gains.
"You know, my head, it feels much clearer now," Sir Dereck grinned even though his face remained scarred, "finally, I remember all."
"About time too!" Smalls and Matilda chinked their glasses together in celebration, "it was rather worrying us."
"It was nice of that new gang to set up camp in the middle of town," Teddy nuttered from his pint, "we got right round them so quickly."
"There were three of them..." Neddy shook his head as if remembering a horrific incident, "Three..."
Eddy groaned, looking somewhat bruised, "Maybe we should have scouted them out to see what type of gang they were?"
Matlida dug him in the ribs, "Yes, three badgers was a bit of a shock!"
"Three FULLY-ARMOURED badgers, that's insanely tough!" Eddy complained.
"Well, I wasn't the one to wake them up with crossbow bolts!" Sir Derek laughed.

"Three slightly annoyed, insanely tough badgers, with no fighting equipment tough!" Smalls twiddled his whiskers and looked at the other stoasts (weasels and ferrets, but he thought of them as brother stoats), all this was good humoured, but a couple of dormice further down the bar were looking at them suspiciously.

Sir Dereck groaned comically too "Three mildly annoyed badgers who were tumbling over themselves grabbing their kit, so I charged in on their leader, attempting the decent thing of taking him down."
"How did that work out for you?" Neddy asked with a grin.
"Badly," Sir Dereck groaned, "one of them grabbed their polearm and floored me in one swipe," Sir Dereck rubbed his head where a new scar on his temple stood out, "you chaps replace my armour with cardboard while I was under the weather or something?"
"A charging, extra-strong badger with a two-handed weapon, that was utterly unpleasent!" Ron the Weasel looked up from his beer, as a new member to the gang, but an old hand at this sort of work, he knew that he should drink his pint slowly and guard his tongue until fully intergrated into the gang. 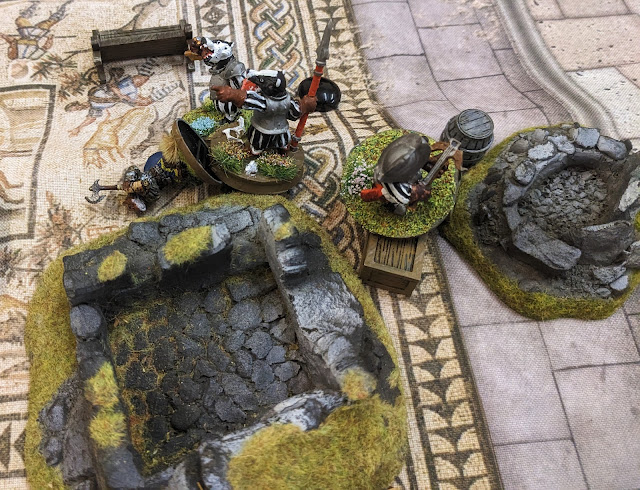 "Glad to have some shooting company now though," Neddy grinned, raising his drink to the new-comer, "It kept their heads down a bit."
"Even if you two could not hit a barn door together." Eddy chuckled, dodging the back-pawed swipe of his brother.
"Question Teddy, what spell do you keep casting on us? One minute I'm fine, the next I see red?" Smalls asked the hooded brother, who was looking nervously at his sword
"Oh, no, be quiet you infernal blade... No, not you Smalls, my sword is grumbling on again."
"Wantssss more, soooo tasty!"
"Shhhh..."
Matilda looked at Smalls, "Thought you were being brave taking on all three badgers by yourself."
"I had no choice, I just had to attack." 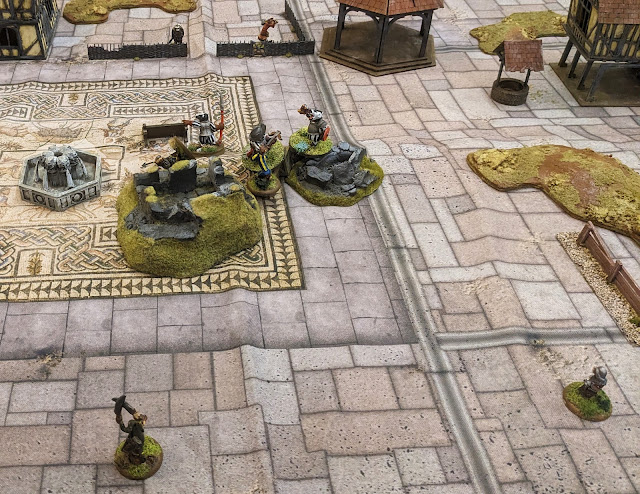 Eddy took a long, considered draught from his beer, "You say that, but the nutter with the spear went after me next," the stoat shook his head, "glad we are all so fearless."
"Strange, the rage crept over me too," Teddy added, "I normally just hang back, but seeing Sir Derek down, I knew I had to do something." He twiddled his stemmed glass. 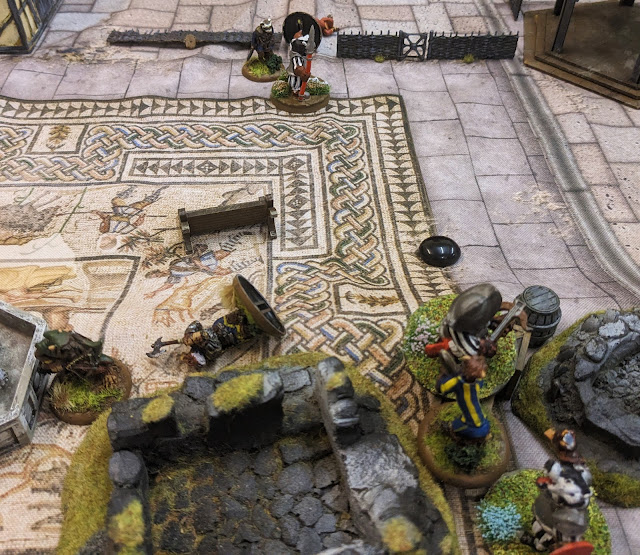 "Yeah bro," the mage laughed, "it made all the difference, you pulled that badger archer straight down." 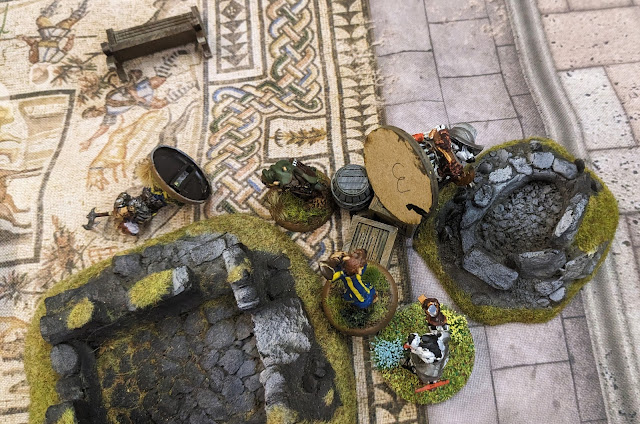 Smalls looked at the stoat mage with an arched brow, "Notice you were in there pretty quickly too "
Eddy rubbed his newly healed arms, "Wouldn't know, I was seeing stars at that point, know how feel now Sir Dereck!"
"Sooooo taaaasssssstt, brunt like a fine pinotage, with earthy undertones, deep, satisfying, weeee wannnnttts moooore!"
"You heard that, right?" The mage looked round the group.
Rob looked at his new comrades, puzzled. "Heard what?"
"Our brother says his sword talks to him." Eddy laughed.
"It does," the mage pleaded The gang all laughed, but Ron has seen that blade flicker black and red as it had been plunged into the badger captain, it was .. odd 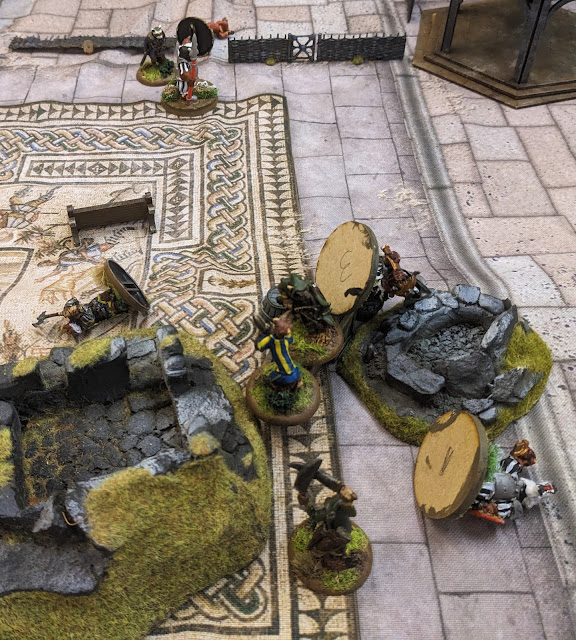 The last badger of the Brockton Militia shuffled off quickly after that." Smalls raised a toast. 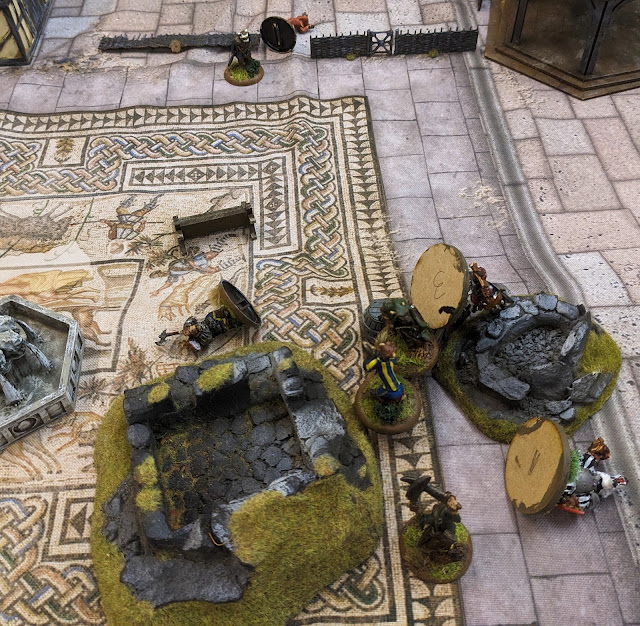 "Brother freeferrets! A victory won."
All stood, toasting their success
Sir Derek looked at the grinning gang. "Boys, with Ron's delivery payment coming back we were already comfortable for many days, but I cannot believe as soon as we and the Brockton Militia healed up, they were on us again."
Eddy shrugged, "Must have been something they really wanted?"
"Revenge?" Teddy laughed.

Neddy waves a paw at his drink, "Hardly time for our beer to get cold and they were back." 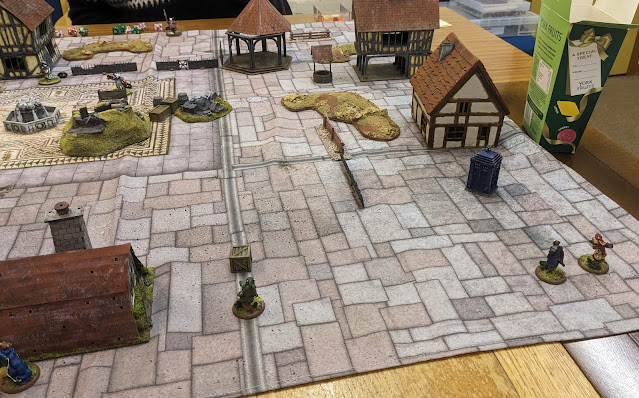 ."And our benefactor wanted his lost items located, which we knew would pay well " Sir Dereck pronounced.

"Got some more looooooovely baaaaadgeeer blood. Soo fulfilling, so moreish!"
"Quiet!" The mage hissed. "Glad we took their captain down first. Wander what he was up to trying to get across the village so quickly."
Matilda, quiet for so long, looked at him and grinned, "Probably trying to deliver like our Ron." 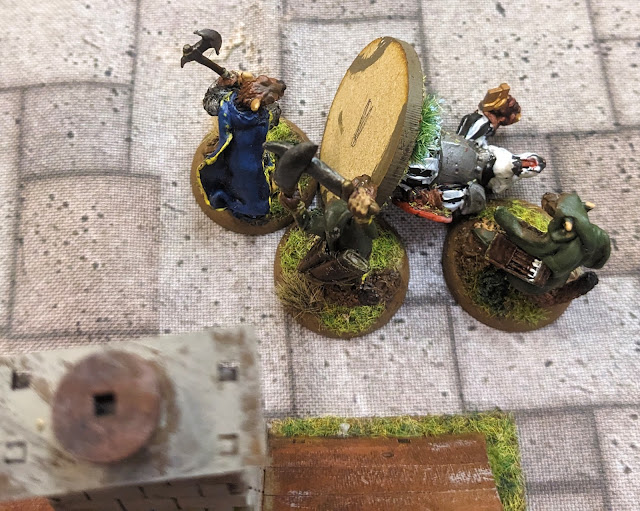 "We got their archer too, very happy to see that, good teamwork chaps " Sir Basil reached under the table, pulling out a round bottle, " Plum brandy to celebrate?" 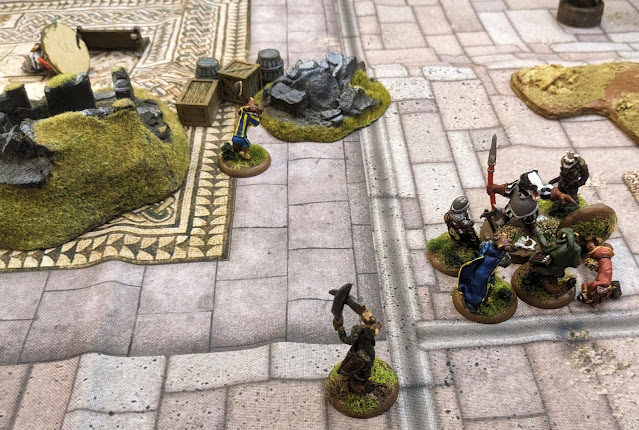 Eddy looked at the others, "Since I got taken down again, any chance of some decent armour?"
The others looked in their purses, and the stack of coins grew considerably. "Ron?".
"Yes?"
"Got any more former colleagues who want to join us?" Matilda winked
The weasel looked longingly at his drink. "There's a couple I can think of, maybe I'll have to pop home and see  them."

December 13, 2022
Hi all, As the months go on, I am finding more random stuff that does not fit into any catagory is creeping it's way up to the surface of my lead mountain. I decided last year rather than just throw it back like one of Nobby's escaped socks, I would actually paint some of them.   One of the holy grails of 90s Wargamers , Sharke from Alternative Armies, (the other being the original Heinrich Kemler, but he sells for £125 on ebay) recently found they sold him seperately, as I was looking for other bits, he popped up and I thought, well, why not? "Sgt 'Arpurr.." Where's his eagle? When I paint fantasy mages, I like to keep it Loki. "Mewling quim!" Note the second dagger. Footsore viking warrior I did get rid of the flock, honest Honest!   Woohoo Painted for Halloween, never mind, sure one will get used for zombie hunting! Ghostly fox Back Where are you?   Space orc heavy
5 comments
Read more

January 23, 2023
I was asked to do some more Napoleonics, this time Russians. The owner will base and add his own flags. tarted these 10.30 Friday night, did the assembly, base coats and ink washes by about 1. Saturday started at 09:30, worked through until 2ish when I walked the dog for two hours, then did another hour tidying up. Machine mode? As usual, the owner will be basing these, ready to fight Leipzig at the weekend! Artillery batteries Can you tell where I've reused tongue depressors? Gunners stand ready Limbers and teams Limbers closer Trip trop Five cossack regiments Top down Fair amount of lancers Off they go Charge!   Batch 2 of the current order:- Russian artillery - mixed Boom? Boom? Will someone please man those guns? Cassion teams   Interesting multi-part kits. Here they are. Five wheels, two chassis parts, in 6mm!   Four units of Russian line in greatcoat On the march Going that way? Back view That way? Four un
Post a Comment
Read more