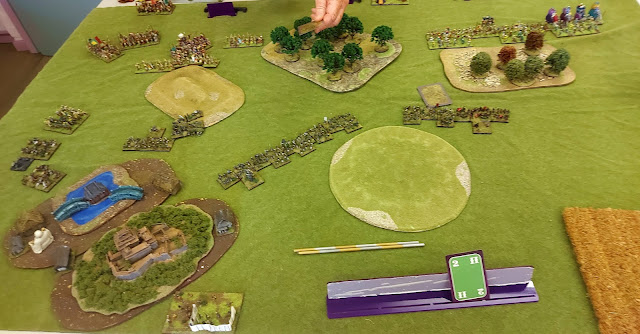 My Senguko Samurai vs Dik's BEAUTIFUL Delhi Sultanate. Dik won both the scouting and terrain rolls, and chose to site his game in a jungle in an effort to disturb my Samurai. We both had not looked at each other's lists so as to make it fair, but my list was unchanged while Dik had a multitude of other options.

It also did not help that all the negative terrain of note ended up in the middle of Dik's side of the world, including a large jungle, a wood and at one point a swamp (thankfully he removed that one), while I gained a large village, standing crops (under my dice box) and a gentle hill on my side and one in the middle. 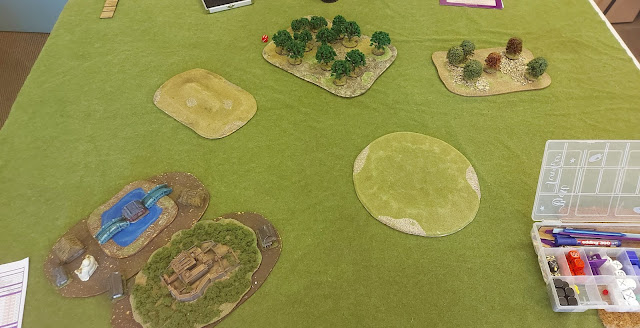 I was 50% outscouted, so five of the nine were on table, allowing Dik to plot to out manouver me. However, the terrain funnel was not in his favour here. On my right rests my allied command, Fluffy holds the centre with his four units, and the average bows sit proud in the village, while my cavalry hides from the superiors numbers of four units of six shooty, melee expert, short spear protected cavalry and as far as possible from the fully armoured and firearme armed elephants on my right, escorted by three units of melee expert infantry with firearms armed skirmishers. 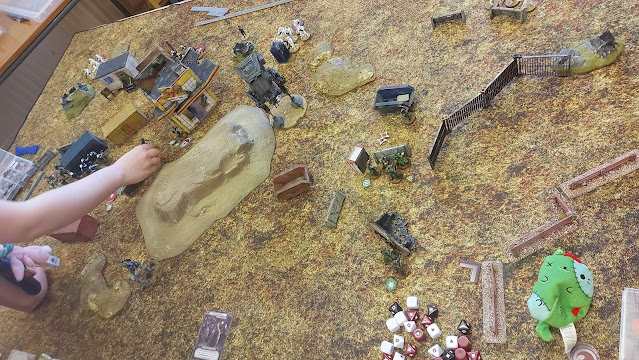 As Dik deals for turn two, my neferious plan becomes clear, the bulk of my Ashugaru spears and Samurai push left to anchor between the village and the jungle, forcing Dik to come to me, while my cavalry emerges from behind the village to engage his light horse. On the right, my two allied units head off to deal with the three units of bodyguards, while avoiding the nellies!

The split in the allies is so that my superiors could switch from 'close' to 'loose', ready to fight in the wood, while my average allies spot a way through to the camp. A unit of superior spears, despite the arrow storm, ascends the hill, while the rest of the line face off against superior cavalry. My line is flanked by the average bows, who support my cavalry against a wall of beautiful cavalry. 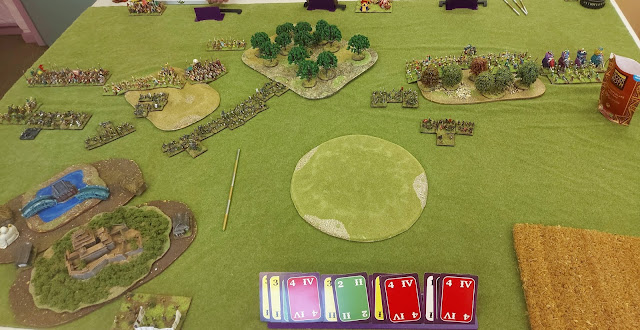 The first charge goes in, Dik's troops are melee expert, so doing something in the impact would help sort a green/green fight which could be deadly. 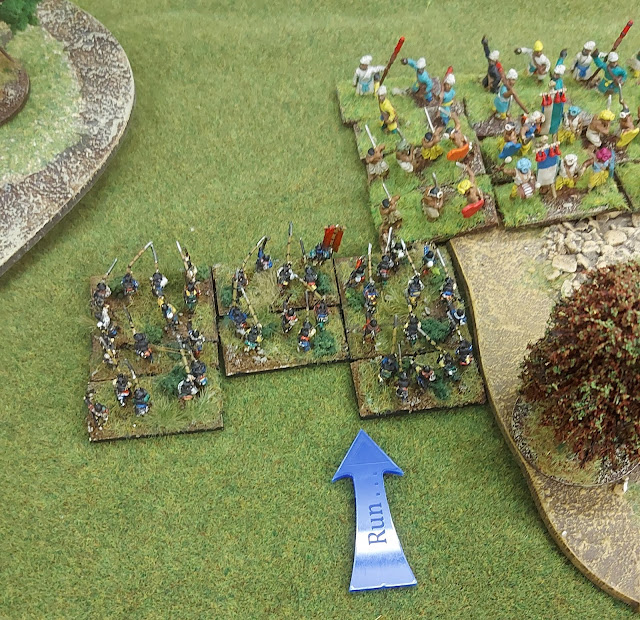 My superior spears weather the arrow storm and contact the average, unprotected, combat shy bows, and promptly loose a base! Typical! 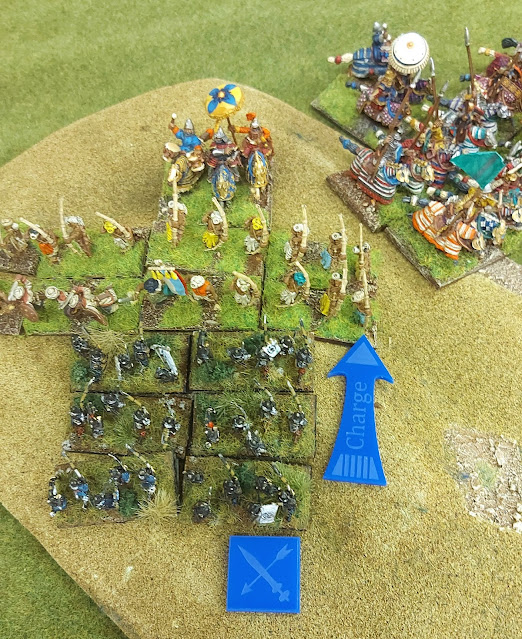 David in trouble as Imi picks off his units, she would lose 3 to his four overall.

Dik does not have the cards to turn his right hand two units (elephants and foot are both tribal) and his superior bodyguards angle in to my superior allies. The average allies lose a base, but matter as they kill two of the Delhi chaps and the enemy camp is in sight (behind the playsheet as I was explaining how unprotected TUGs get hit hard by archers).

Please note Fluffy can have a bad day! FOUR BLACK CARDS, not much happening here then!

Thankfully, not much needed to happen as I was either already engaged or being charged by cavalry. Superior short spear melee experts, not a good combination vs average long spears, as only the superior stat counts. I would always be +1, except where his general was involved where it is evens. On the top of the hill, superior long spears vs unprotected combat shy bows was only ever going to end one way (2-0). 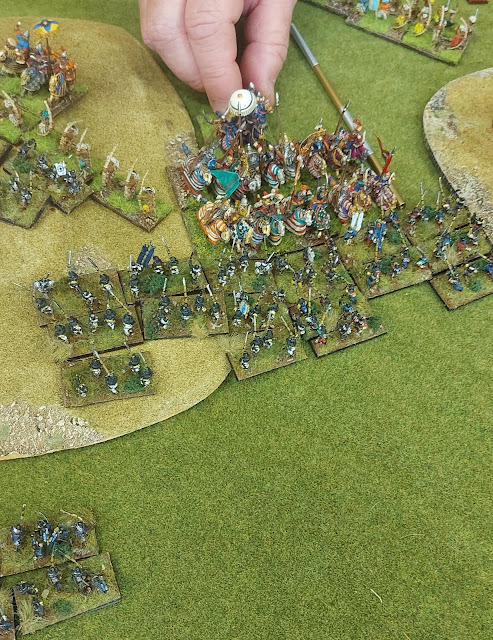 My average spears break the swordsmen and hare off after them towards the enemy camp, catching and squashing the supporting skirmishers too (5-0) 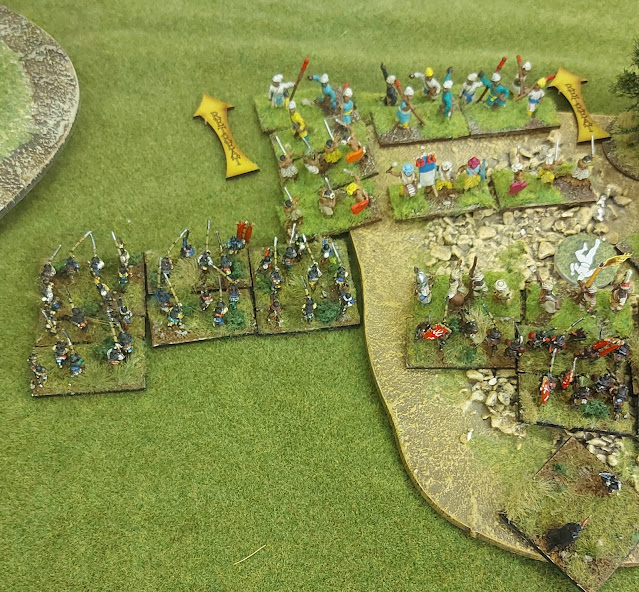 Dik accidently blunders into bow range, he gets one white, which wounded my cavalry (and would be bought off) while I unleashed 3 yellows and 3 wounds on him, and a red on the light horse. My 8 cavalry is presently holding up 18 bases of opposition, with 6 more moving to join them!

Normally, my cavalry is a reliably expensive elite strike arm, but against the massed cavalry I was up against here, some times it pays to be cautious. This was two TUGS I did not want to throw away to missile fire. 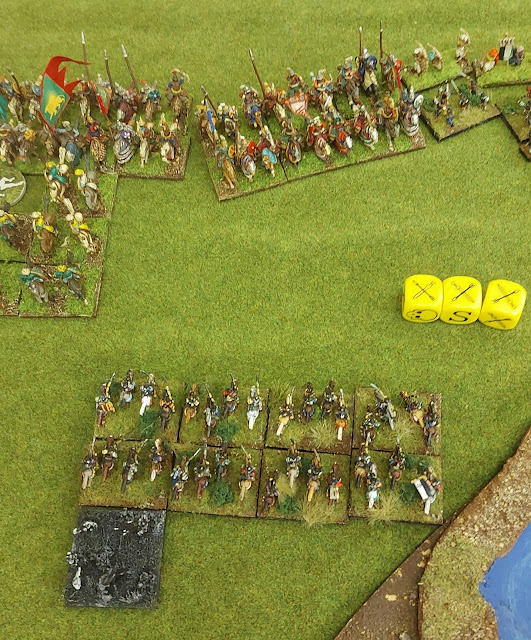 I spy with my little eye something beginning with 'C'. 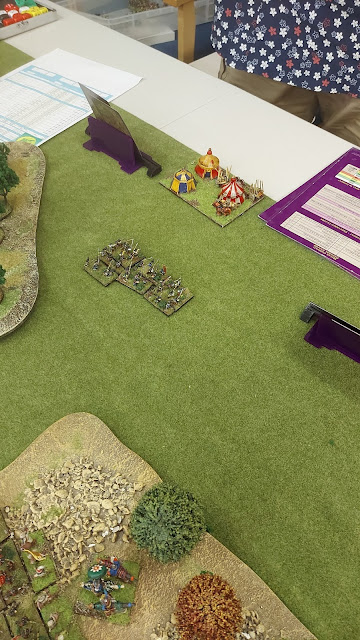 Dik's second unit of archers break to my protected archers (yellow vs whites), causing a KAB on the cavalry behind as they broke past, it leaves my bows exposed but my spears are their to protect them (7-0). 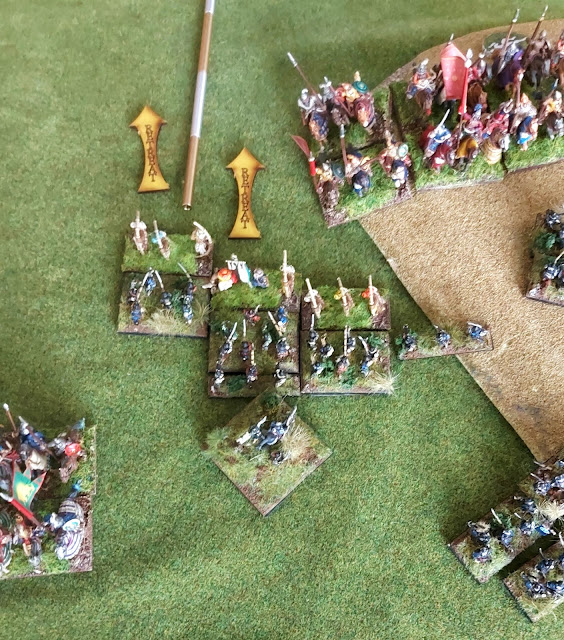 At this point, with the enemy camp in danger, two units of cavalry about to break in the turn (one from massed spears, the other would be destroyed by my superior cavalry) and the club power on the fritz, we called it a night at 15-2. Dik had a flank charge perfectly set up on my superior spears which would have no doubt have broken them.

Another great game with plenty of laughs. Dik was crippled by the terrain and the spears and archers getting into his bows, he also did not manage to get his bow armed cavalry shooting at my spears, which would have slowly but surely torn my line apart ready for the charge.

June 12, 2021
Andi is an old, old friend, back from the days of DBM, so 1990s! He asked me to paint his airborne division for him, thankfully one brigade had already been done, but there are still plenty to do, and an armoured division, and an infantry division too. 2nd Airlanding Battalion done for Andi's airborne division. One more to do, then I need to finish the armour and infantry. Top view A. B, C & D Companies Top view A & B close up Side view C & D Companies Side view HQ and support stands Top view Pioneer stand worked well 1st Airlanding battalion done now. HQ elements. Face on. Top view A, B, C & D companies Must order some extra bases... Decent formation, now there's two more the same size to do. The whole formation, it's quite big I suppose. 24 bases, in Spearhead, of decent foot. Brigade HQ elements, because I could. Pointy bloke is in charge... With the Glider Piolt regiment in their tray. 2nd Para done. HQ 3rd Para Top view Recon HQ Support wea
1 comment
Read more