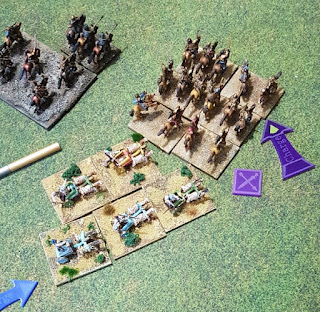 With the time of Covid slowly coming to an end, and bubbles slowly deflating, it was time to catch up with Paul and grab a game of MeG.
Looks like my camera lens was a bit smeared, I didn't check before the game, so some shots will be a bit blurred. Sorry.
Paul very kindly allowed me to pick, and I went for a test run on my Siatic Egyptian (my great lockdown painting project) and he went with his Median Empire. It's biblical man! It's also an almost historic match up as these are some of the latest lists in the Chariot army section. In fact, both have allies that cross over into the Classical section.
Freshly painted, and first time on table, no spoilers but guess the result!
Not often two cards outscouts 5! Black/White 0, Yellow 20, Red 40. 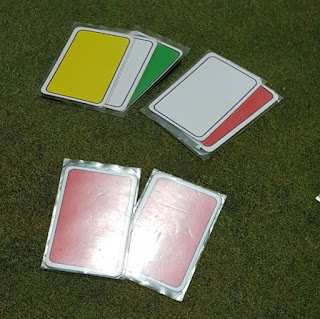 On a fertile coastal plain the armies of Media and Egypt array. My building are my old 15mm Flames terrain, as I'm waiting for my Egyptian themed stuff to arrive. The mighty Nile acts as anchor on the flank. Thankfully, both allies decided to behave themselves (no black and white on this hand that would make them unreliable, although we would both be dogged by hands of zebras later).. 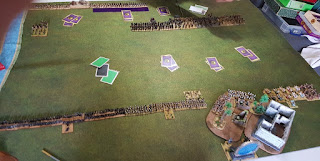 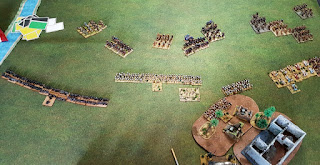 So, all we do is push back in our lines, pinning cavalry in the middle and drawing in Saka on the right, maybe I should not have switched to formed? Gives Paul an easier shot.

Ouch, that stung! Paul moves through on the right, my bows break cover from the town

A rear charge should have spifflictaed me here, but we got away with it rather! Two flexible units fighting as Skirmisher vs skirmisher, but I'm combat shy and caught in the rear, Paul is on +5, and we hang on by our fingernails! 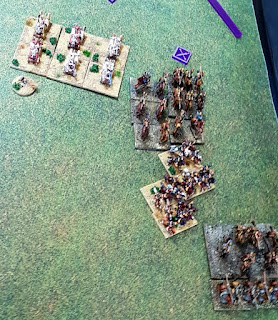 I do manage to catch the cavalry in the centre as Paul deploys his horse away from my approaching long spears and their nasty +2 attacks. However, the catch also involves catching an awful lot of arrows too! My unit is rather battered by the time it reaches him.

My chariots decided that the only thing to do was to go and catch Paul's cavalry before it danced out of range, superior, in the back, short spear and skirmishing enemy +7, double red, twice! This was only going to end one way! (2-0)

My flexible horse held out, and this allowed my other chariot unit to repeat the process, two more sets of  double reds cleaves through the Saka horse, leaing my flexible horse with an enormouse sense of relief! (4-0) 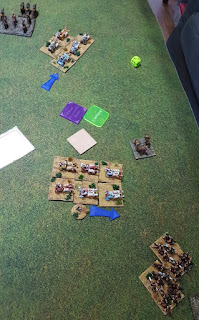 Well, at this point it's almost looking hopeful! I'm pushing Paul about, and he's only got one unit into my backfield so far! It did not help we were both hampered by pretty naff cards.

While funnelling cavalry through the gap behind, Paul breaks off his cavalry after damaging both my units of Egyptian Grave Guards. My left hand one was looking especially fragile after starting on a 6, it was now down to 3! 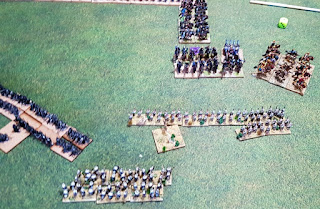 Bravely (foolishly) they chargeback in, and are shot down as they do! (4-2) 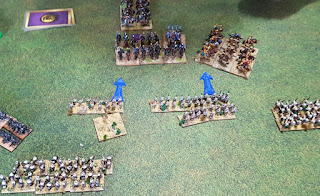 On the far left, my Greek mercanary spears push a unit of light horse off table, through Paul's Median Levies. (5-2) 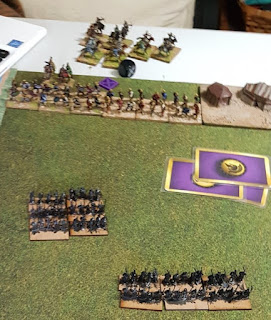 What a mess! My spears vs Paul's hosse on left of shot, and many different charge combinations going on here. 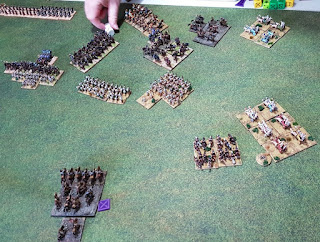 Thing is, playing Paul, he will find the most adventagous, because he's incredibly good at that. 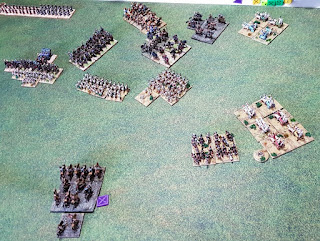 Meanwhile, my second Egyptian spear unit dies, but as they do they take the troublesome cavalry unit with them. (7-4) If Paul's cavalry had broken a turn earlier, I would have been into his backfield, oh well! 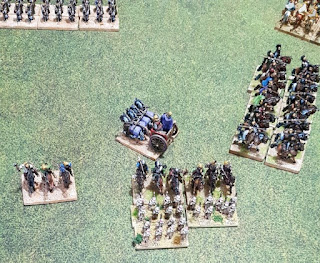 On the charge, Paul points out how he is going to smash me again! His first charge takes my guard archers in the rear with two red&yellows which minces my bows in seconds, then smacks into my combat shy average bows! (7-6) 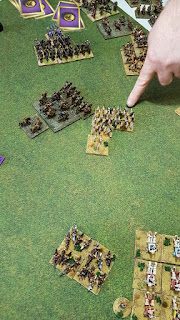 The bows somehow survive that, and turn to face, to be joined by Pharoah and the chariotry of Red Squadron. Off camera, despite pushing unit after unit through each other, Blue Squadron dies to missile fire (7-8) This is not going well! 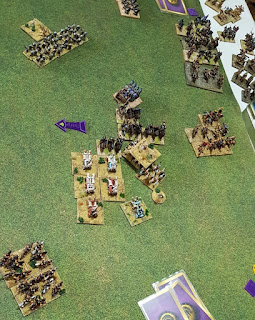 My Greek Mercanry spears FINALLY make it into contact with Paul's troops, some on the back line, yes, they marched nearly 4 foot during this game, they're 10mm, they've only got little legs! One, hitting a unit of combat shy bows, starts losing hand over fist, despite rolling two dice better (yellow dice hate me)

In fact, another spear stand is trading equal blows with Paul's Median foot, problem is, inevitably, there are more of them then me!

Which allows Paul to threatenn an envelopment of my spears, and my superior Egyptians spears too!

My chariots, being superior melee experts, fail to do the damage on Paul's elite cavalry, who mince a second foot archer unit (7-10), I only need to lose one more unit now. 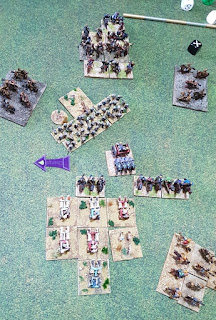 The end comes from an unexpected source, Paul's combat shy bows, on a black overlap, cause the one wound they need to kill my heavy Greek spears! GAH! (7-15) (Very zoomed in, so rather blurry, sorry)

It was great to play and see Paul again after all these months, a truely epic game lasting 4 hours. Top game, really enjoyable and a real challange to both of us. I am happy with the way my army fought until the spears fell apart. Paul has learned that shoot and charge chariots are worth avoiding, but if they get a flank they bring the hurt! I learned that spears vs bows is one sided, the wrong way...
This army will definitely get finished soon, and then on to Warfare (if it's on)!