June 30, 2020
A quick dive into the Early Medieval lists for a teaching game with Dik. Dik had Nikephorian Byzantine, so I had a choice of Sassanids or Early Scots. Scots it was...
It's been so long since I've done one of these... Blooming lockdown. Dik came round for a socially distant game in my garden, the rain just held off, and we had a thoroughly good time.
Dik is a long time gamer from the mighty Leighton Buzzard club. Nikephorian is potentially a hard army, many choices of troops, and it is a cool army.
The table ended up being dense standard and two hills fell into Dik's side. Look he's got the whole boxed set! 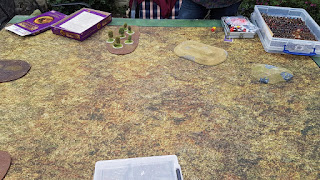 But I managed to outscout him by 20%, so he deployed first. A mass of tooled up long spears, shieled wall AND shield cover, all armed with bows held the centre. Two superior cavalry and a light horse to my left, katafracts and thematic cavalry (lancers with shoot and charge bows) to my right.
My Vikings went left, my horse and light horse right, mass of scots warriors (short spear, shield wall some superior) centre. 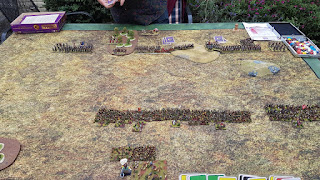 By turn 2, the katafracts had charged in, so had the lancers, at the end of the round, my Norman knights broke off and charged again turn 3, assissted by a unit of warriors that had got round a flank. Two of Dik's cavalry disntergrated under thunder of the Norman charge (4-0). 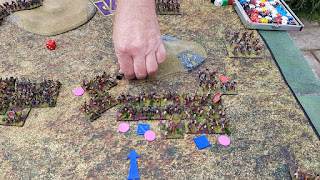 On the right, superior horse faces down the Viking allies. In the centre my mass of warriors faces uphill long spears who shoot! The right develops into a scrum as my mounted warriors tangle a cavalry unit (about four turn of us both rolling blanks there).

In the centre, one of my average warrior units is stopped short by bowfire, but my right hand superiors pay a red to press through, and my left hand units were within a base depth and could reach, no matter how slowed they were.

Two fours of superior cavalry charge the Viking huscarls (top) and hirdmen (bottom). My integral archers do some damage, but my huscarls are being picked on by a unit of javelinmen behind them! 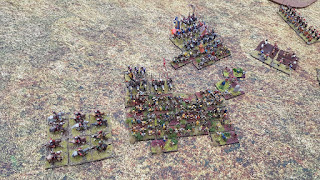 My Normans charge again into a second line unit (combat shy) while my light horse watch on as the front line is slowly picked apart by my mounted warriors. 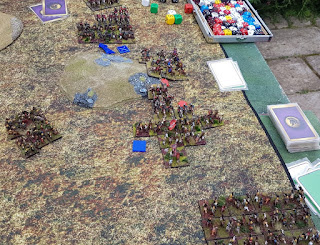 The huscarls 2-handed-cut and crush hack the cavalry apart (6-0), but pursue into a position where a flank charge by Nik's foot is very likely. 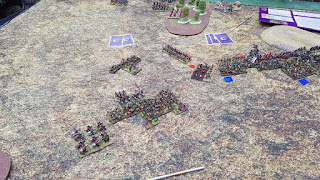 In the centre, Nik is better than me in melee (long spear vs - nothing) and in some cases uphill, but my valient biys sell themselves dearly, slowly whittling away at the Byzantine shieldwall. 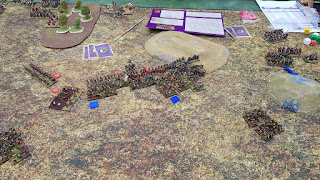 It looks like nothing much has changed here, because nothing did! 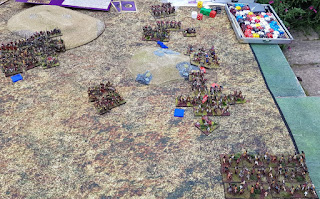 Dik did fall back with his thrid line which had got too close to the second line (a useful rule), but it was too late, two Byzantine cavalry units break (10-0). 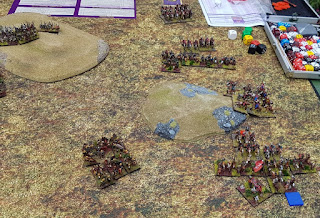 In the centre, a unit of my warriors fractured, giving Dik 2 points, but at the same time my superiors broke a unit on the hill (15-2).

Victory to the Scots. It always has been a solid army, and always surprises me how decent it is. Admittedly, my Norman knights and Huscarls accounted for 6/15 of the points, the cavalry for 2 more, and the foot everything else! I would have been in serious trouble if Dik had brought Varangians, but then it woyuld have been a much smaller army to fight.
Good game, and Dik said he would like to try again at the club, so let's hope it does soon.