August 16, 2019
Last night, we broke out the Cruel Seas, with four of us playing, and three fleets, we decided first off that my British fleet should take on John's Germans.
John wanted to use his Sboats, as after four games, he still hasn't launched a torpedo.
We decided to play 'Destroy the convoy' as we had three tankers between us.This was an excuse to finally get my Fairmiles on table. 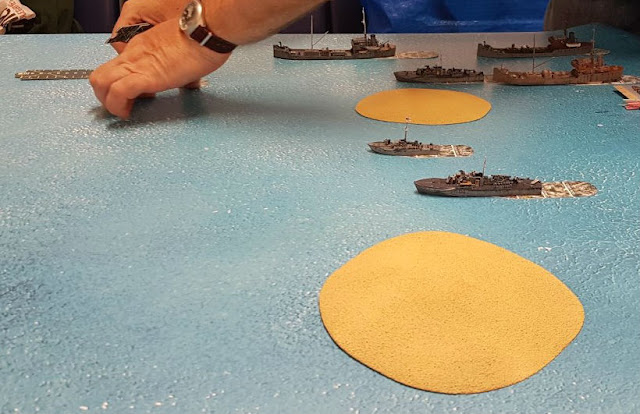 We had two Fairmile 'B's and one Vospers I and a Vospers 2 on escort duties. John fielded four S100, gunned his engines and came in to attack. 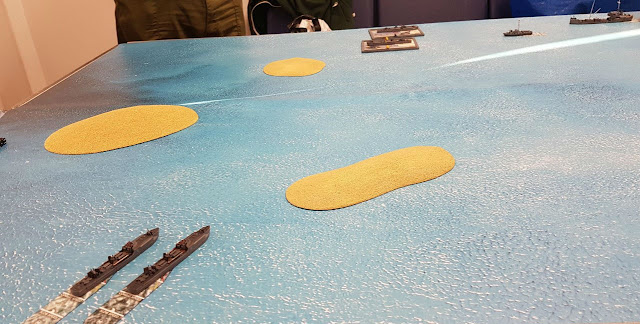 Two more S100s appear, all up gunned with quad 20mms too.

The first S100 run by Mike puts an eel in the water to scatter the convoy, while Dave swings a Vosper in to intercept, but at this range, the smaller guns will be difficult to hit with. 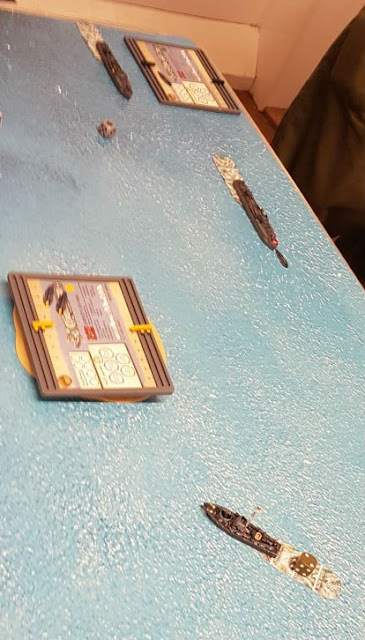 But a Fairmile B, with two six pounders, is a difficult proposition, as their range is massive, and our dice were rolling very low!

I peel off to deal with the second two S boats, while the tankers start dancing to avoid the sand banks and the approaching torpedo. 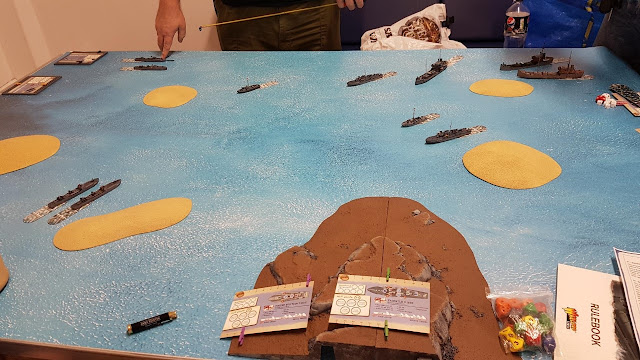 When you roll this for criticals, you know that you are going to have a good day! 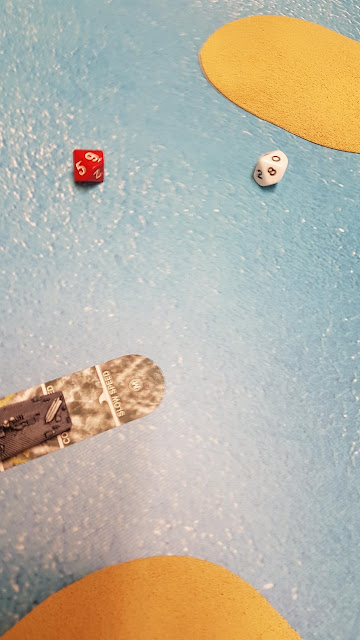 That's lots of extra damage then! 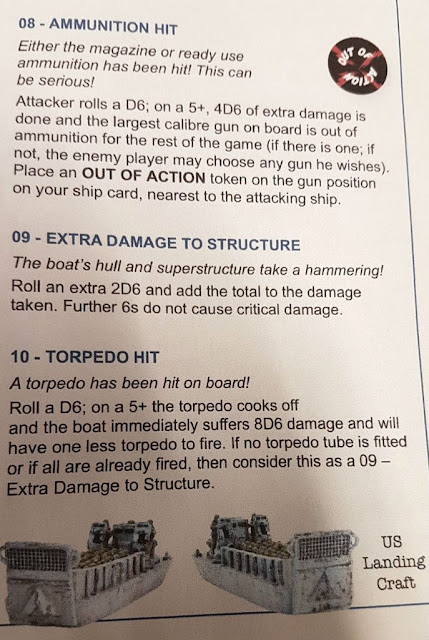 The first S boat is finished off by Dave's Fairmile, the Germans have learned that the British are not as fragile as the last game. 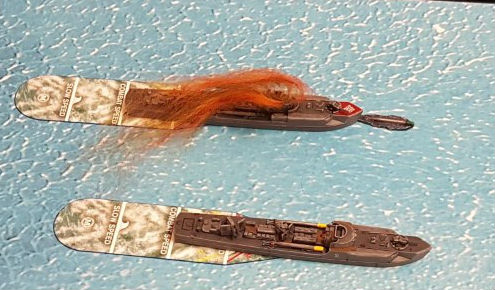 Clearing the sandbanks, John moves to flank the convoy, while a Vospers attempts to intercept. The S boats actually caused the Vospers 6 points of damage here with MG hits. 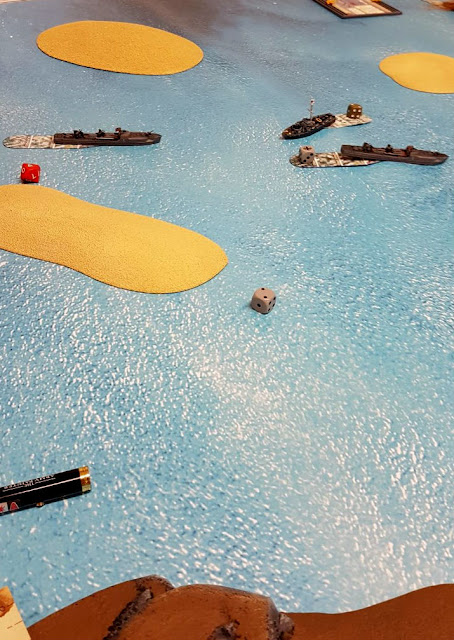 The Fairmiles swing to intercept as Dave's Vospers gets a little too close. 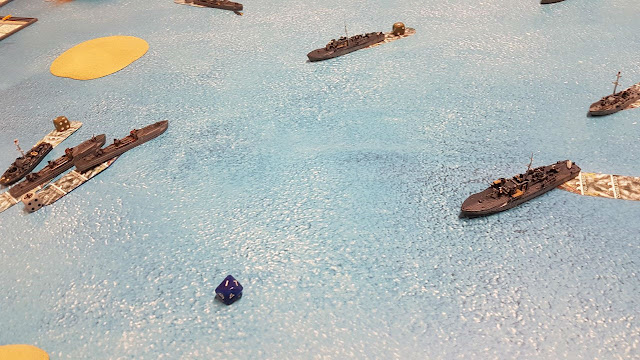 A little Vospers picks on a big bad Sboat. A torpedo whizzes past under his hull, the deck crew standing there looking at it saying "Did you see that, it's a bit close!" 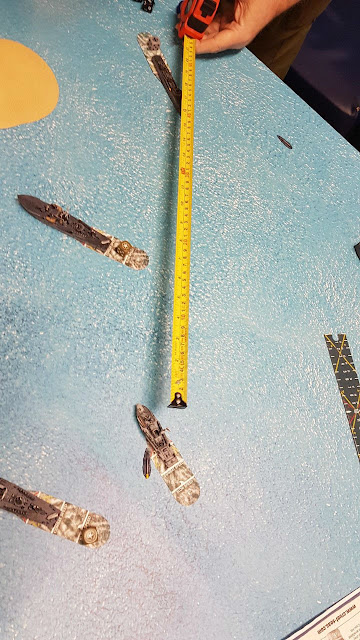 John charges in, but my Fairmile causes untold damage to him, and his boat catches fire.
His second S boat, taking a rudder hit, collides with my Vospers, who blinded by the burning hulk, fails to dodge. 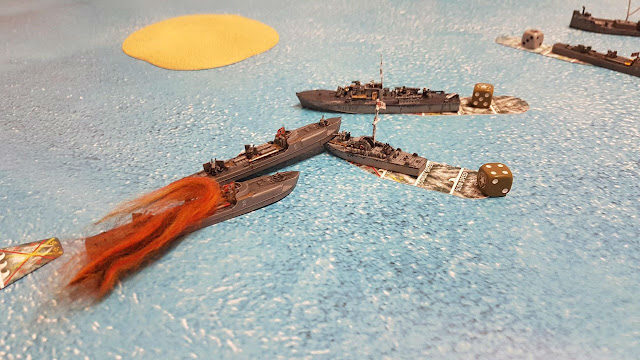 We roll damage, and it is enough to sink John's boat, while doing large damage to the Vospers it remains afloat. The German crew abandon ship by walking across the decks and surrendering. Brits win without taking a loss, and the Germans have learned to fear the Fairmiles!
John still had not launched a torpedo... 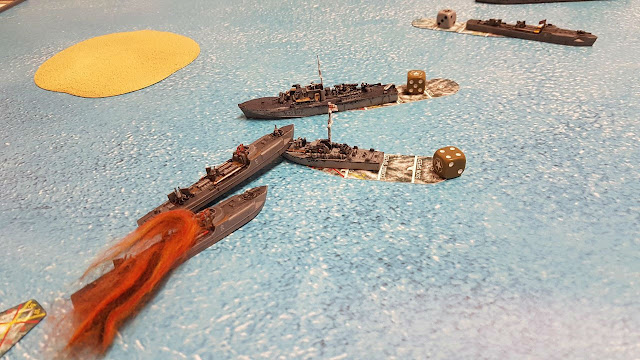 We reset for game two (it was only 8.30) and we decided to try out  the ambush scenario, which needed two large and three medium ships, so we  Dave's Japanese kit. This means, Sampans!
One rated as veteran, but this is turn 3, with one or two arriving a turn. They move 9cm a turn at full speed, German Sboats do that at slow!!! The first large ship was an inexperienced Tanker.
john continued using Germans, still trying to use torpedoes! 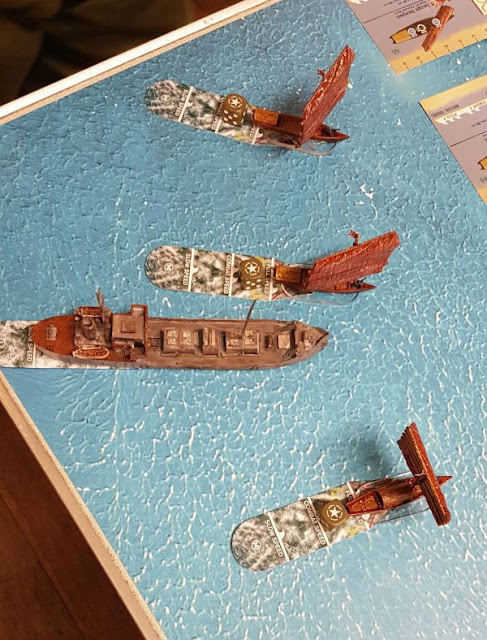 And the other was a Japanese minesweeper, it was HUGE in comparison to other ships. It spotted and opened up on Dave's SBoat that had put fish in the water. 20mm guns and a 4" gun will certainly ruin your day! 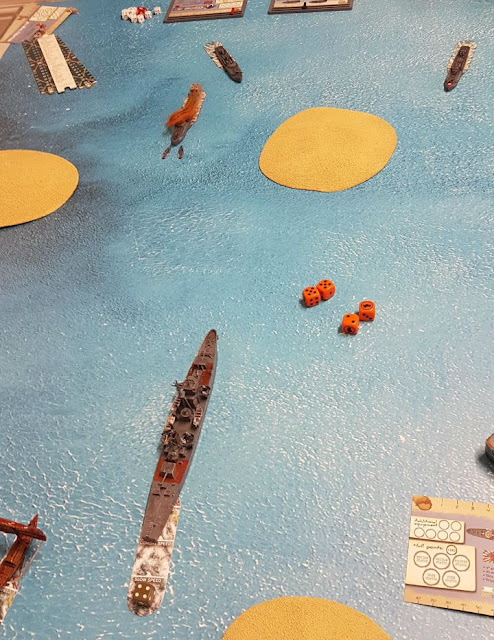 John FINALLY gets some eels in the water! 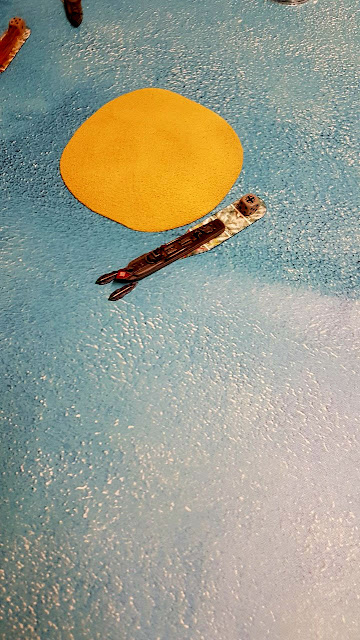 That's an awful lot of fish heading to our fleet, as all the German fired all their weapons at the minesweeper, with 20mm quads the damage peeled off remarkably quickly for a 100 damage ship. 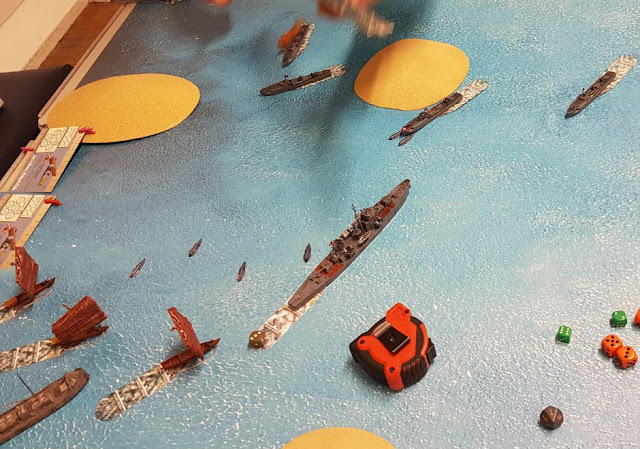 And very soon she is dead in the water, but not before causing John's top S boat to loose rudder control while facing a sandbank! 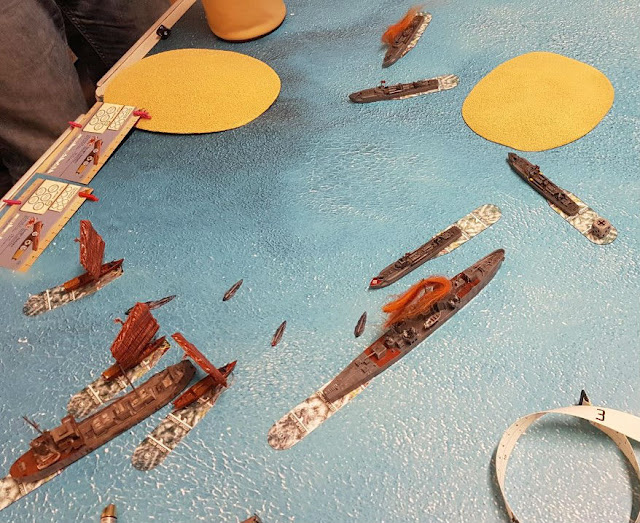 John tries to get in close to the tanker to hose it down, but in the process rams a Sampan. 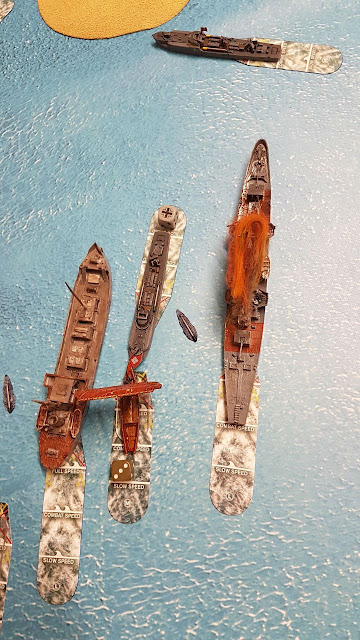 John runs aground, Dave's remaining S boat has cut it's engines and is acting as a static gun platform and blocking one of the routes the tanker could take to safety. 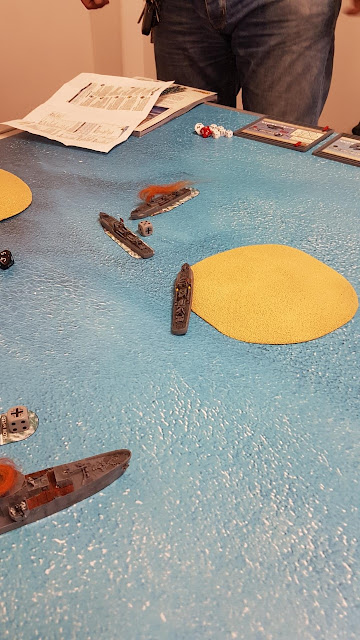 John's second S boat is taken apart by 20mm fire from the Sampan and the crew throwing bricks! 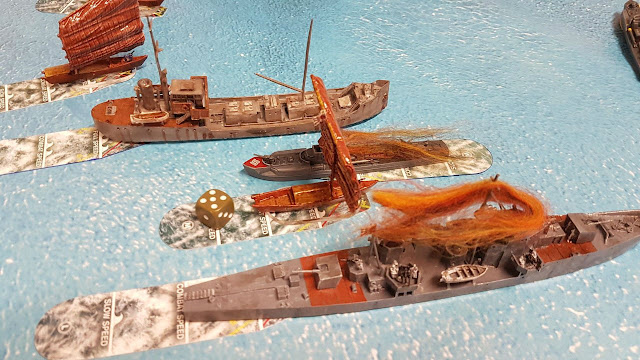 With that, the Germans admitted defeat, again.
John had finally managed to launch torpedoes (but I had moved inside their arming range, so they missed), the mine sweeper packs an almighty punch, but as a large, slow-moving target, is very easy to hit and lose systems on. We did, however, learn you could save criticals (that might have made the first game a bit fairer) and that MGs and HMGs cannot cause criticals on large ships.

Two cracking games, with two very different flavours. Loads of laughs, and some head scratching too. Sampans for the win!