Roman artillery from PSC in 15mm

Ballista from a Blister pack?

PSC remold of Corvus Belli Romans, and this was part of my prize from the last Global MeGfest competition, a pair of Roman scorpions. 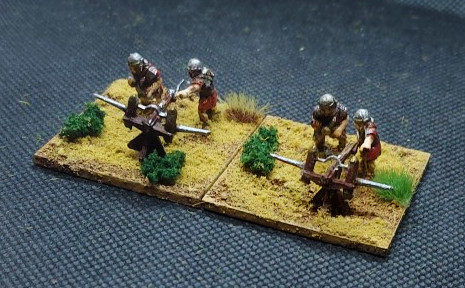 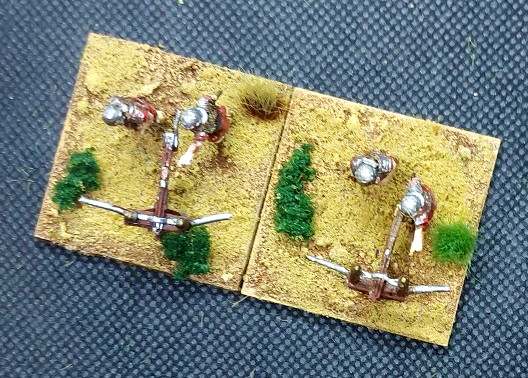 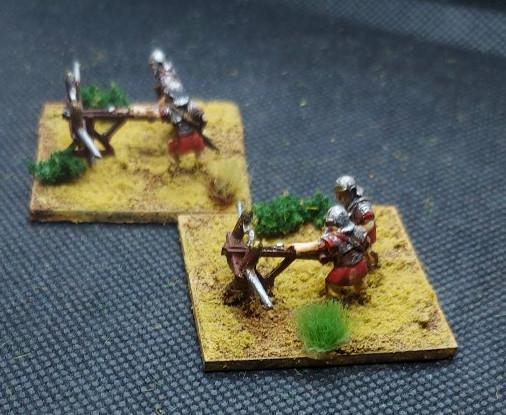 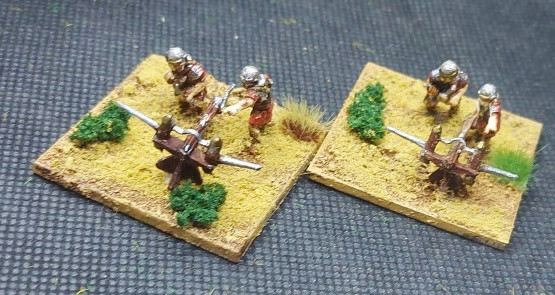 April 15, 2020
So, a new project begins , is nearly finished! Hausa Kingdoms. So, who is this lady? She is Queen Amina , an almost legendary queen of the Hausa kingdom of Zaria . Reading about her, she deserves her fearsome reputation, and is the ideal CinC for my army. With her bodyguard of Khurasan heavy cavalry to act as guard cavalry recreating the scene above. The shields were an inspired moment of 'hey that looks good'! These have come our really well. With her bodyguard. However, there is no actualy figure that suited my requirement, so I needed a female warrior that I could convert. After a long search, I found some female Skythians from  Xyston Miniatures ia Scotia Grendel. (The rest of the pack I gave to Paul). Quite different from what I needed. Rear view Front view of the proposed changes. Rear view.  Modifications in place. Thanks to Phil Lewis for the Greenstuff.  And a few extras to go with, Second in command,
5 comments
Read more

October 20, 2020
Andi is an old, old friend, back from the days of DBM, so 1990s! He asked me to paint his airborne division for him, thankfully one brigade had already been done, but there are still plenty to do, and an armoured division, and an infantry division too. 2nd Para done. HQ 3rd Para Top view Recon HQ Support weapons Stand close up Divisional Recon Divisional HQ Divisional HQ Recon (Beige berets as these are meant to be SAS) Glider Pilot Regiment Top view Their HQ Armed and dangerous glider pilots Tetrach Mk VII light tanks (airmobile but awful) I insisted Andi has these for D-Day, after which they get replaced with Stuarts! The paras and HQ in their box Glider regfiments and their gliders. That finsihes the paratroopers, just need to do the airmobile briage now. Armoured Division begun! The air recognition transfers arrived, also each squadron have their symbols on turret sides too (honest, you might not be able to see them, but they are there!). 1st Armoured Regiment, a mixture of Cro
1 comment
Read more

June 26, 2020
Footsore recently released this rather fun game, based around 28mm skirmish fighting in ancient Greece. Tried it at Campaign, then got a set for my birthday from Manny and Rob at Boards and Swords . Picked up these two from Annie at Bad Squiddo games, Thea an Amazon hero, and her fairy friend scouting on guinea pig, because, well why not! Turns out Ray also has Mortal Gods! He asked me to paint his stuff, who was I to deny him? Slingers, Peltasts and light hopilites done, which finished Ray's Mortal Gods bits (just in time for Keith's order to arrive) Light hoplites (shield transfers by Little Big Man & Victrix) Slingers Peltasts A musician, called Jeff A spare base... Ray's Heavy Hoplites and heroes from the core set, plus a Medium Promachos because I like the figure, I bought it twice and this one is now Ray's. The heavies, 4 bases of. With their veteran at the
2 comments
Read more