July 26, 2020
Two face to face games, in an actual retail outlet, in England. Amazing.
Steve needed a game, Roger and Adrian needed a game, I asked Hammy nicely, and there were tables at Battlefield Hobbies available on Saturdays for gaming in the convenient middle ground of Daventry. We arrived to brilliantly socially distanced, tables, welcoming staff, plenty of sanitiser and a temperature check as we came in. Well organised all up there.
So, we stood about admiring each other's masks and deciding who would play who. Steve had originally requested a game using his beautiful Later Swiss vs my Senguko Samurai, but with the arrival of Roger and Adrian we had two extra armies to put in the mix, so I played Adrian with Later Serbians Empire, while Steve's Swiss took on Roger's Imperial Romans.
Adrian's and my table. Two villages, a secure flank with forest and mountains, two woods. Not bad really for a flexible army vs mounted!

Next door, the Swiss and Romans had a mostly open table. 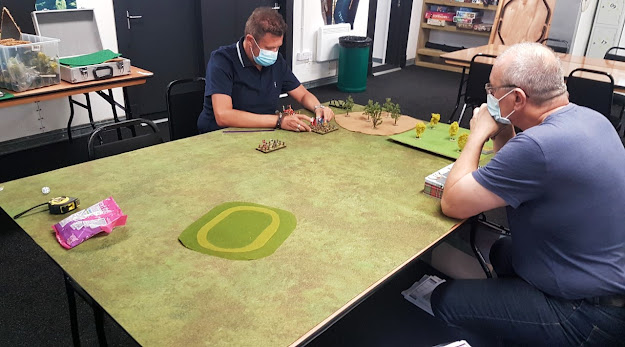 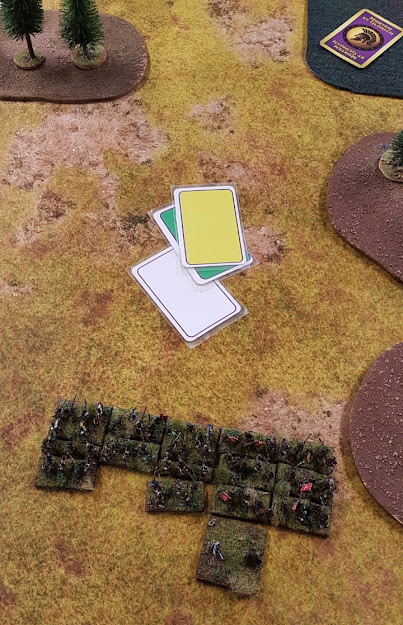 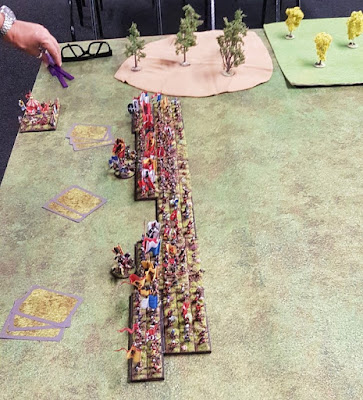 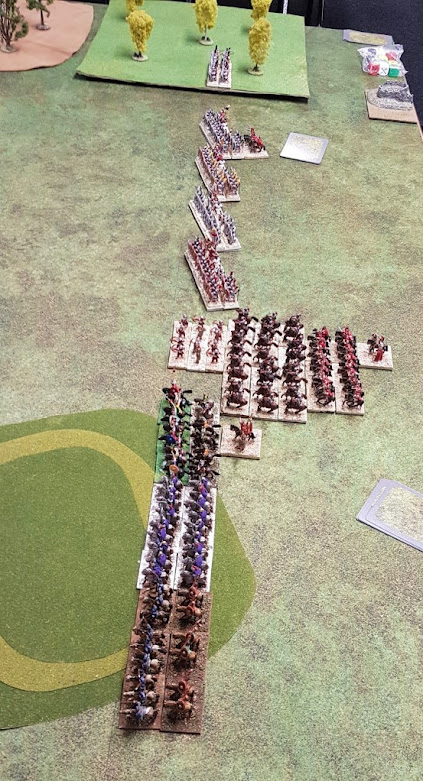 Adrian's flank march - talented, needing at least a red to come on. Phew! Adrian's unprotected combat shy bows, tasty! He also decided to redeploy his superior lancers so his other lancers could threaten. 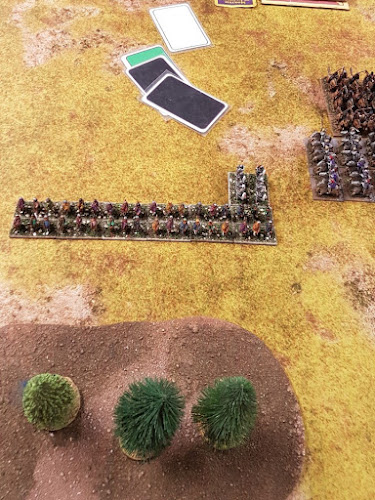 THREE ambushes and a flank march, time to get moving! My wedge of spears and my superior cavalry press towards his knights. 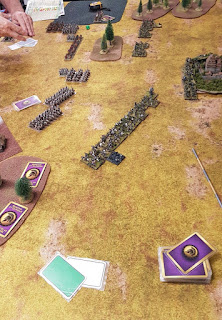 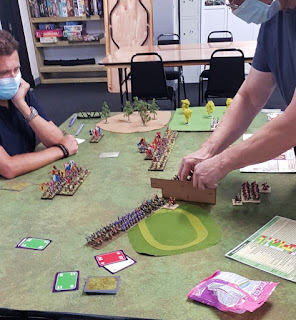 Adrian, after about four turns of waiting for his flank march to appear, looking at the deck to see whether I actually have any red cards in there! 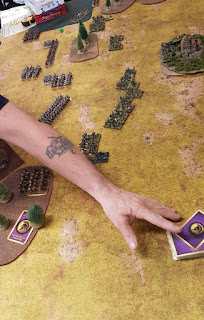 I had sprung two of his ambushes by now. Another archer and a lancer unit appeared. I was going to put a unit of spears through the central wood, I love flexible troops. Adrian's superior knights had repostitioned themselves now. My allies were shooting the right hand gap. 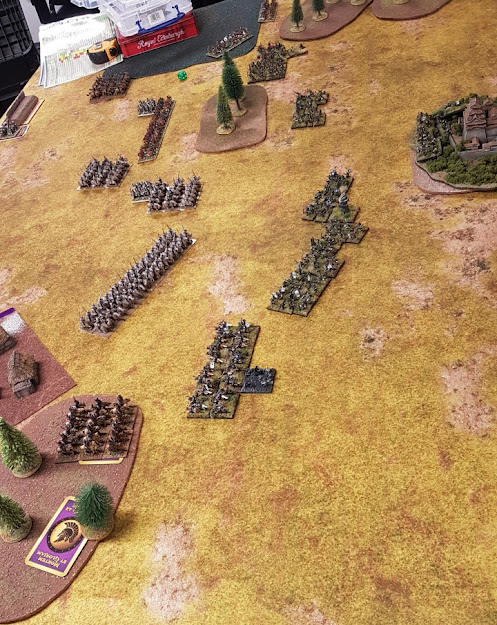 Both armies close on the other table. 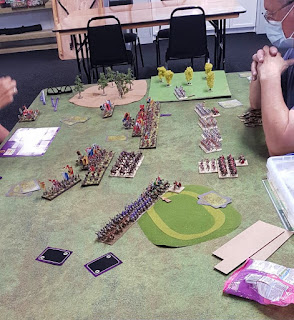 Adrian needed red cards... Oh, was that 4 I was holding?

Adrian had tried to charge my cavalry with his lancers in ambush, but he had a -2 movement for the wood, then another -2 as my skilled powerbow cavalry killed a base and retired to safety behind the flank of my spears.
First contacts, as Adrian's cards did not allow him to hold, my superior spears hit his flank (+ LOTS) and he charges me frontally in two units, one moving, one stationary. 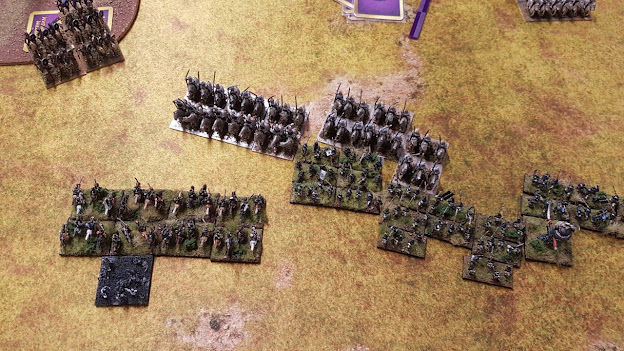 My flank charge doesn't do enough... 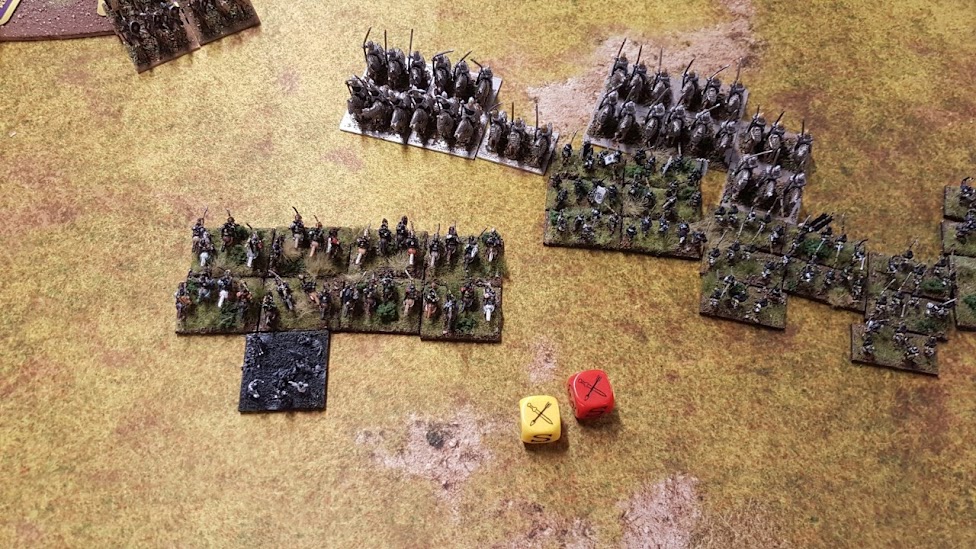 But Adrian's charge also fails to dent me! 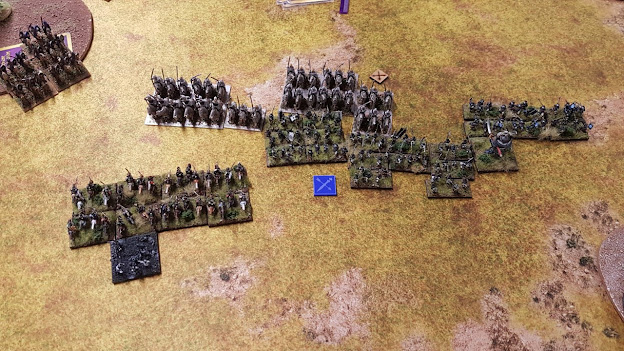 On the other flank, over confidence was almost my undoing as unprotected, combat shy up hill bows hit my superior's flanks and do a kill and a wound. OUCH! 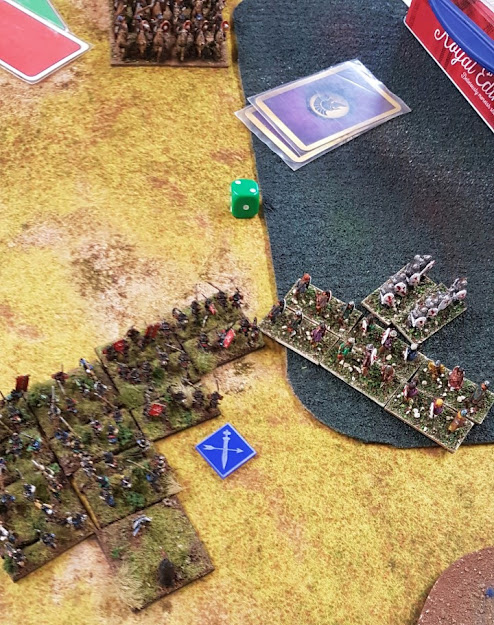 My mounted samurai spot an opportunity, and unleash their skilled powerbow vs cavalry of 4 (yes 4) yellow shooting dice! It was enough to turn the unit into a shower of red droplets fluttering down to the ground behind them... Yes, two skull and two wounds on a unit that had already lost a base sees a rapid disintergration! (2-0) 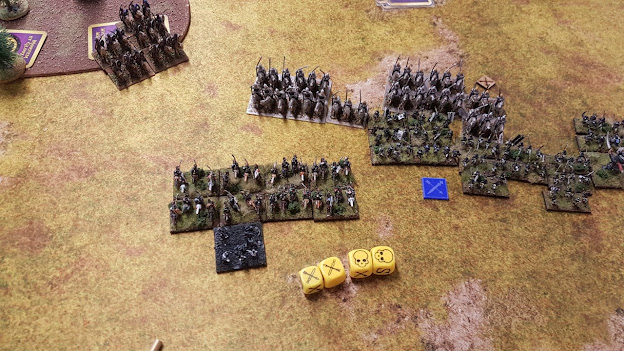 Meanwhile Keills and legions clash, Roger is on teh way to losing his legion here. 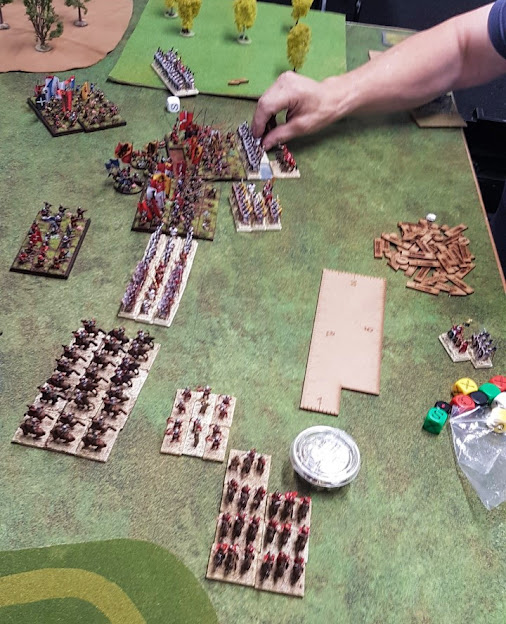 Adrian finally found a red card, after six turns, and his flank march appeared, but not before my spear armed Samurai and Ashugari had despatched more lancers (4-0). My mounted samurai pealed off to face it, but this allowed Adrian to charge my superior spear in the flank, ripping great lumps out of me! All Adrian needed was a wound. Cool as you like though, my superior spears turned to face and started to exhert their own revenge, killing and wounding back. 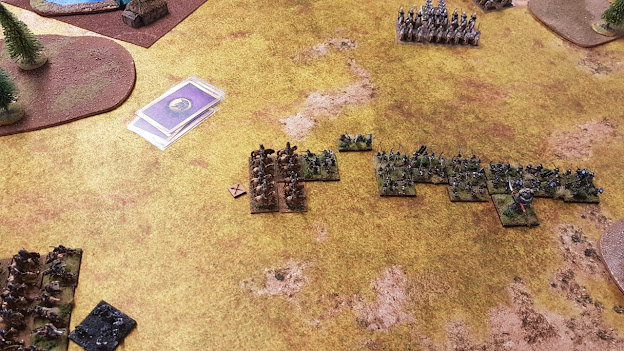 12 aerage lancers plays 8 samurai, sounds like a fair fight! A base a piece, and a wound on Adrian. 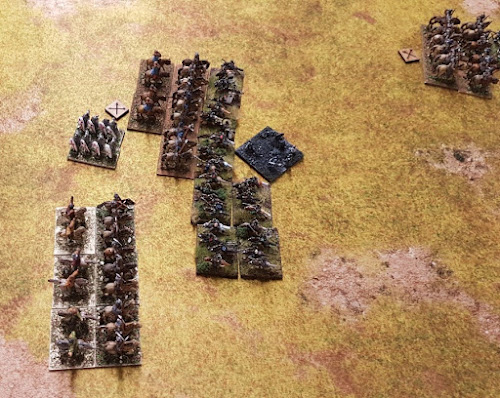 My superior allied spears are making no headway against the average bows on the mountain, but two units of average protected spears into unprotected, combat shy archers will, even with inevitable closing shots, quicky smash through the line on yellows (or red if the close order unit shoves). However, this was troubling, as Adrian had his superior lancers lined up for my flank. His bows broke, and rolled a 1 (-2 BW run away speed) leaving my flank high and dry. (8-0) Good news and bad news I guess!

You know my brittle superior spears? Guess what? They only went and beat the lancers in melee (10-0) but the superior lancers quickly polished off one ashugaru and were in range of a second (10-2). 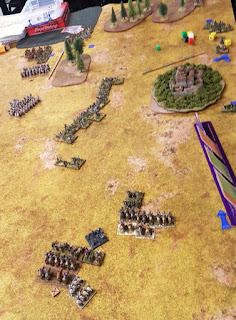 Yeah, that second is also engaged frontally, so will have a bad day I'm sure...

Despite two of the best fighting forces the world has ever known, there was a lot of not killing over on the other table 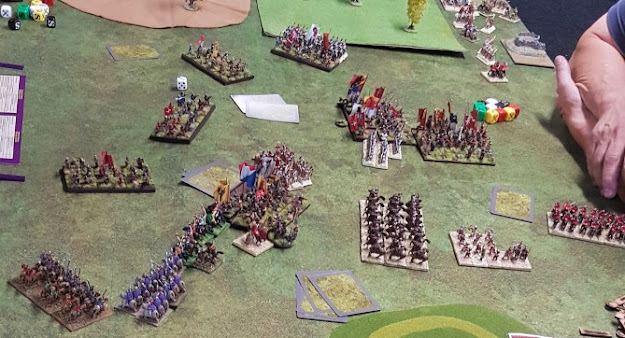 Unfortunately (or fortunately for my Ashugau and Samurai cavalry that were about to break) the shop shut at 5, and we had to call it a day (at about 10 past) and let Tommy get some rest. Both games timed out, outs at 12-4, Steve and Roger's at 4-2, but rematches are eagerly antcipated! Great games, real challenges.