February 14, 2020
Yuezhi - who they?
Basically, nomadic horse archer types that troubled the Chinese around the second century BCE, and on Wednesday night, somehow they made it all the way to 15th Century Japan for our fight.
10mm vs 15mm fun! 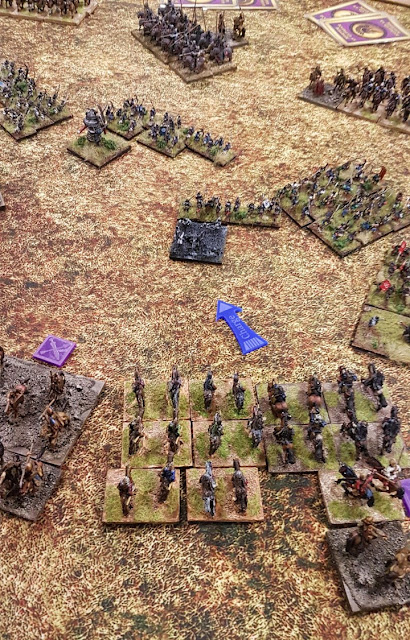 Paul is an expert at using cavalry armies, and man this was going to be a tough fight as Paul trialed an army. My Samurai really don't do well against horse archers as I found out as Campaign two years ago...

My deployment (I was never going to out scout Paul with one card vs his 7), we deployed in dense coastal terrain, with two towns, a coast line, rocky ground, woods, open terrain and jelly beans (from Aldi)

Paul swings a massive block of cavalry in towards the end on my line. they are flanked by light horse, supported by catafract cavalry and more cavalry.
Paul is channelling his inner Theoden tonight! 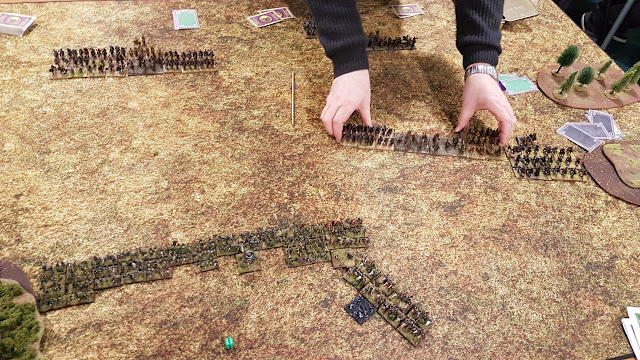 My allies push forwards, and my cavalry tries out their new trait - 'dismountable', they lose their short spear, and gain an extra 2BW on their powerbow range when they get off their horses. We burnt a LOT of black and white cards to get this far!

And those who know me know I will not sit back in a corner. Paul is giving my superior six of powerbows a VERY wide berth.

Foolishly, I let him have a gap to get through. Those are flexible cavalry making for my backfield. 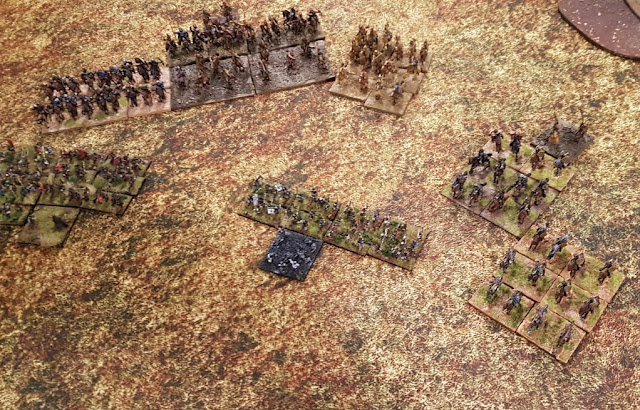 On the left, my average archers face off against flexible cavalry, this squabble would go on most of the game, unfortunately, Paul would out shoot me in the end! 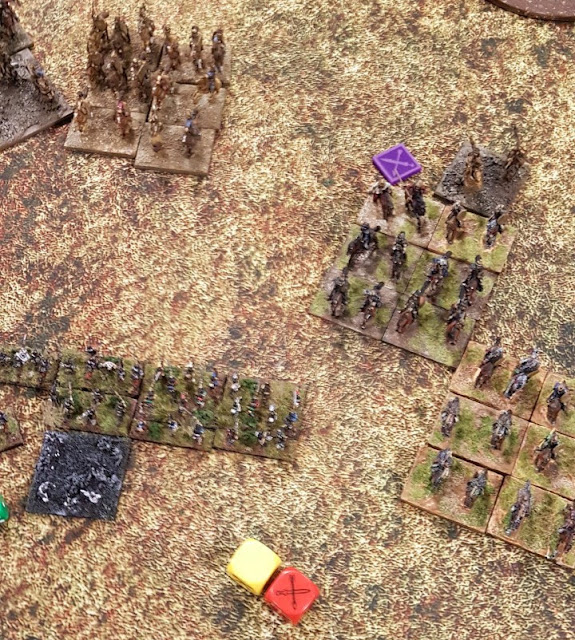 My other archers, although suffering a death by a thousand cuts, unleash yellow dice on Paul. Yes, that is three slowing shots on me, only four bases is fragile! 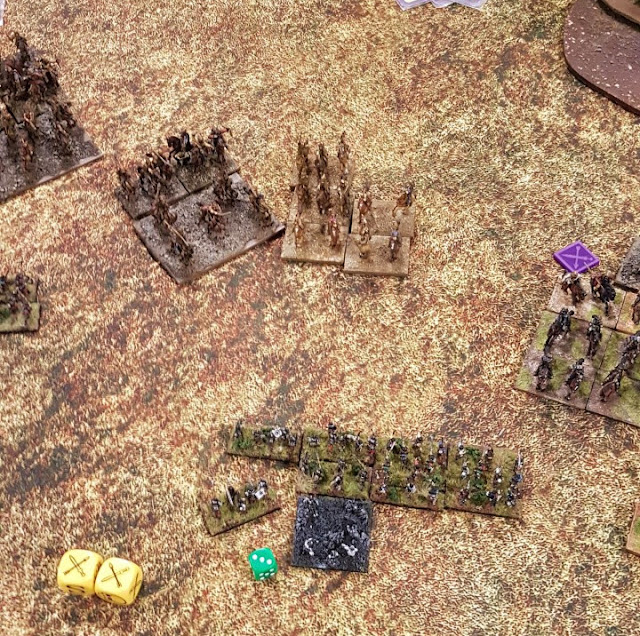 The general situation, looks like I'm surrounded. We were both lossing bases from shooting, and no one had made it into contact yet.

One of my dismounted bows has now lost 50% strength, but it would take a couple of turns for Paul to get the final kill on them. I'm even turning units about to push Paul's cavalry about. They were lucky. 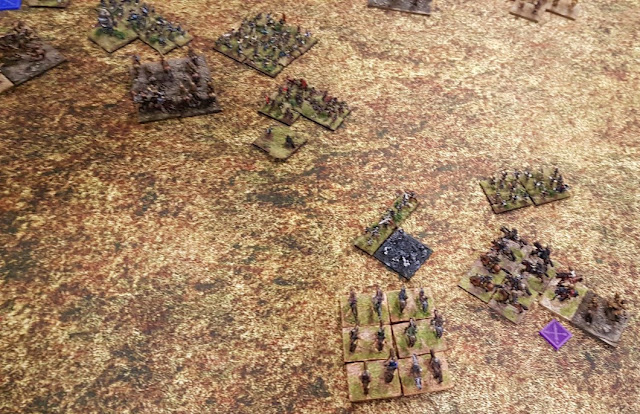 That's a big gap, as his catafracts avoid my bows. My spears push forwards in an attempt to pin units down. 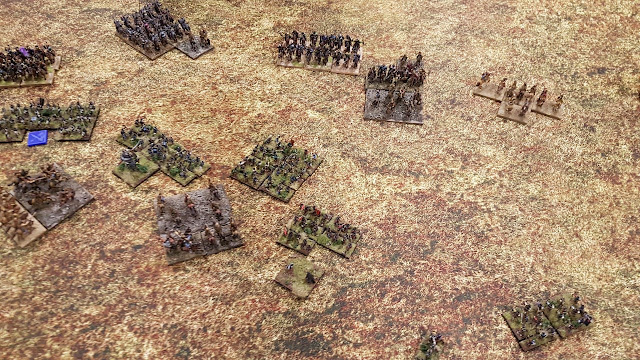 It's like catching fog! Each time I get near the horse lord, he slips away. Paul is really good at this.

My left hand archers are fragile, as Paul switches flexibles from skirmish to loose, especially the ones behind my front line!

Indeed, my army is ripe for the picking. Paul has completely out played me here. I was hoping to get my spears in somewhere! Or my bows, or even a wet kipper might have been more effective... 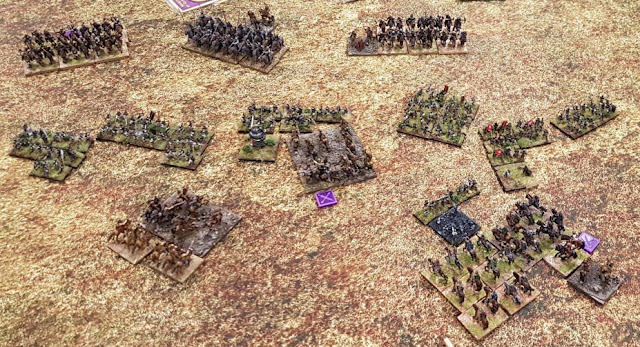 My fragile two dismounted bows spot an opportunity and charge some of Paul's flexible horse that were troubling my main superior bows, but behind me, the rest of Paul's cavalry masses.

And my left hand bows finally break (Paul was close too). I was trying to goad his catafracts into my spears (top centre right), and my superior spears (top centre left) were attempting to catch Paul's other archers, but I had forgotten his flexibility, and Paul has set up a flank charge that could tear me apart. 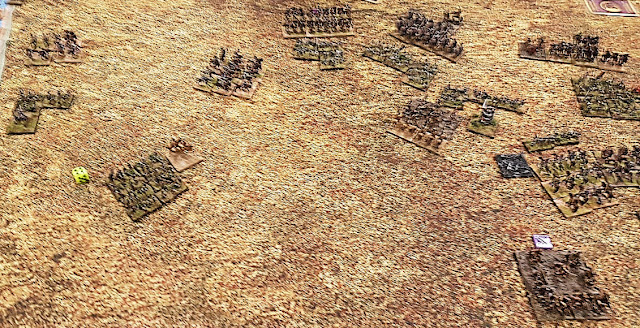 Paul suddenly finds one of his cavalry units short of men as three powerbow hits kill two bases. Another of his units (far right) has also suffered previously. 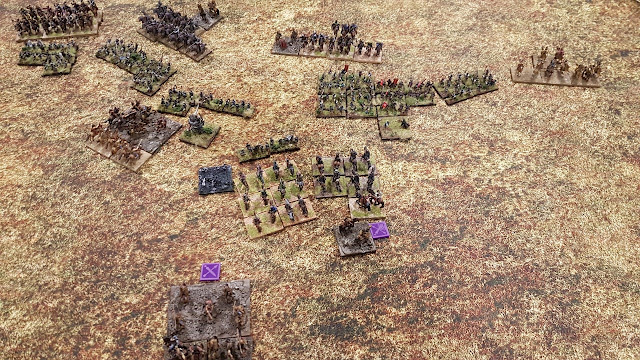 That is a LOT of charges Paul has put in here... His catafracts suffred two deaths, and my superiorr spears took hits too. Paul has also run over two of my superior powerbows as well as my average bows with skirmishing horse (0-6, and I break on 10). 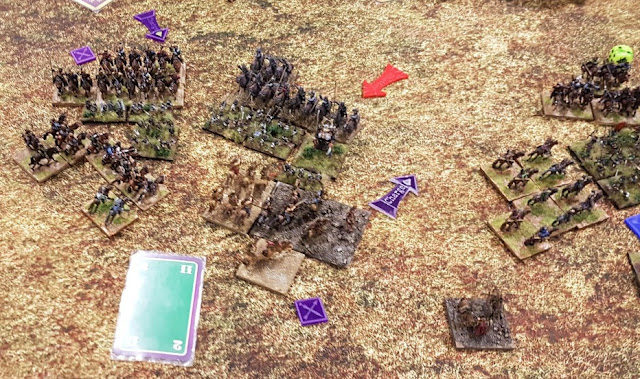 I swing my other bows around to try and pick off his damaged cavalry, and only cause a wound! Ohhh... 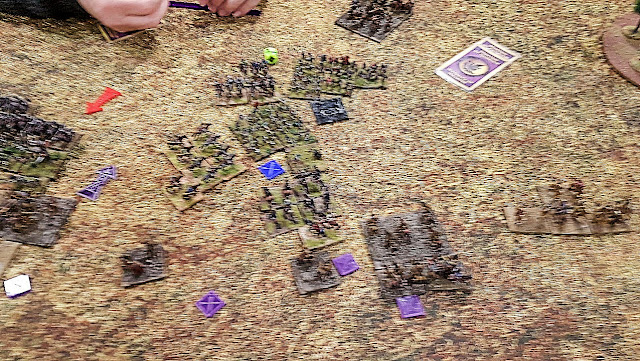 I get him down to 3 bases, finally a hit that breaks him (2-6) it will not be enough I fear, so close, yet paradoxically, so far away! 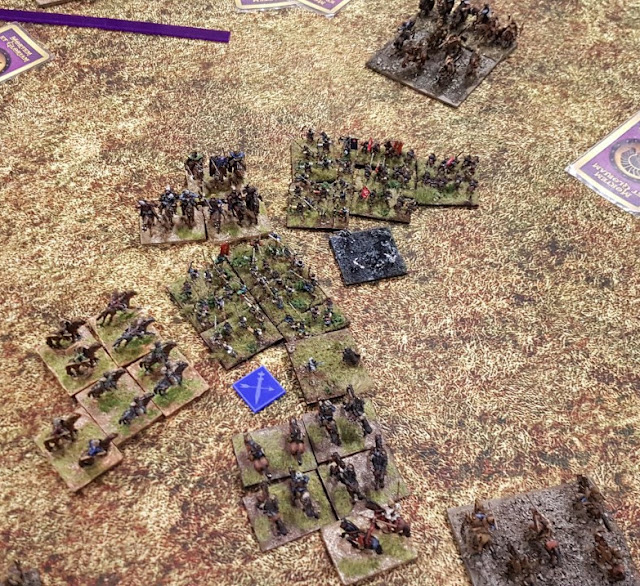 The end comes as both my average and superior spears break, giving Paul a well deserved win. (2-15) 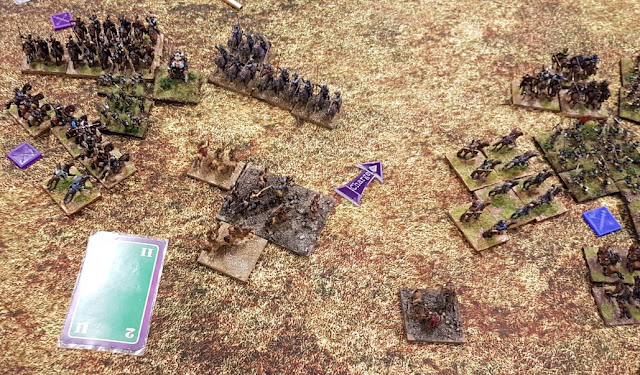 A very good game, and a challenge for both of us, not a frustrating game as some rules, and I felt like I had him under pressure at times, but I let too much round my back. Maybe I should have corner sat, but it's no fun.
Well played Paul! :)