A long trip for me, two streets across, and up the stairs for Wednesday's game...
*WARNING -- MAY CONTAIN UNPAINTED FIGURES*

A learning game to introduce Neil from the Leighton Buzzard Wargames Club to the wonders of MeG.
Neil had raided his figure collection (he is a pretty decent ADLG player) for a mix of Marmalukes and Sudanese that would for a rather beautiful Ayyubid army. Some of his figures are on ADLG double bases, but with MeG it matters not. Saladin would be proud as his forces cross the Sahara to exert their authority over his rebellious vassals of the Hausa kingdoms.

Two cavalry heavy armies meet outside a small village on the plains of Nigeria. An area of scrub on the left, a village to the top right, and an area of brush in the centre. The first deal underway. I position my foot in front of the village after outscouting Neil by a mighty 10%! I have already picked up my mediocre generals cards (right) and on the left my ally decides to comply. Phew! 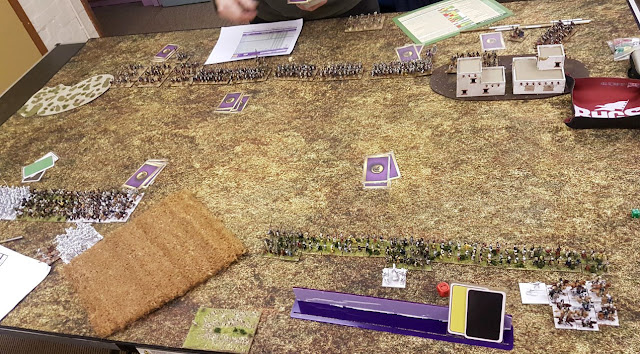 First moves. Neil has a heck of an impressive line of superior cavalry facing down my (part painted) cavalry, who are supported by camels. Neil has also swung out a unit of cavalry on the right, so I have reacted with my spear armed bows. 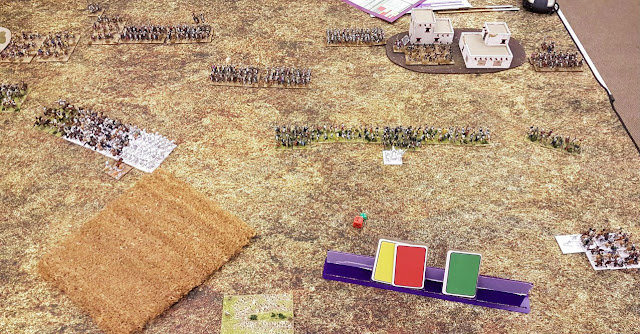 Neil tries to charge my combat shy, loose, unprotected bows with superior short spear cavalry ( a potential +4 on impact), my only option is to throw my spears in to block. +2 for long spears, +3 for Neil,so, he's a bit better! 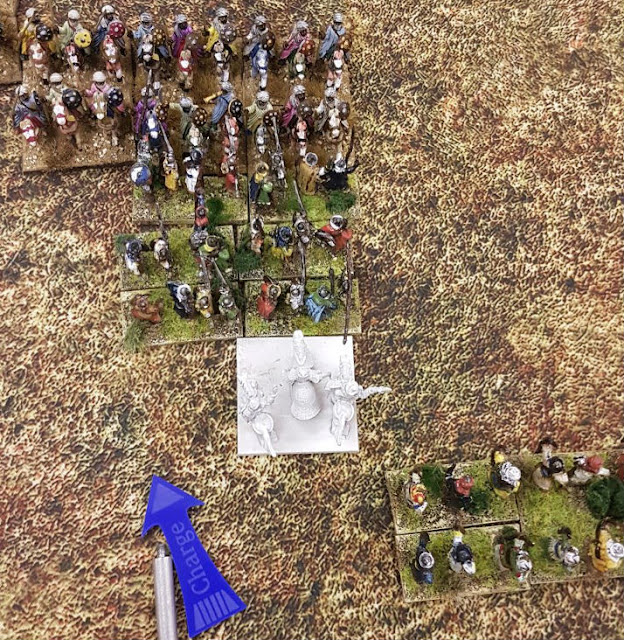 My first attempt at charging flexible cavalry results in my camels losing two wounds and two movement, bit embarrassing, but is does remove the threat of 4 white dice on my light horse from bows at 3bw, while my javelins only have a range of 2bw!! 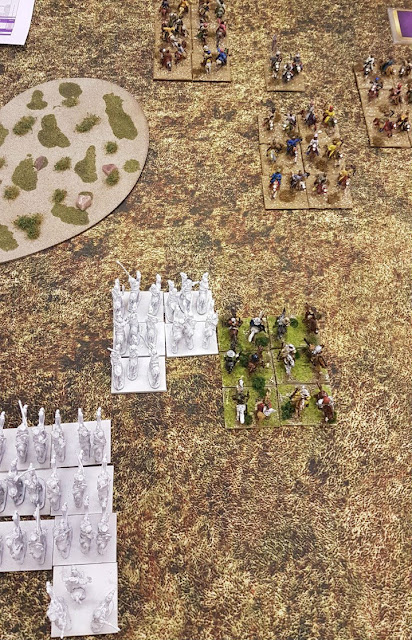 In the centre there is an almighty crash as our two cavalry corps catch each other. On impact, most of my horse is down (short spear vs superiors with short spears) except my guard cavalry with short spear, devastating charge and a legendary general. On that unit I was mildly confident.

On the right, Neil's lone cavalry crashes in to my cavalry, spear armed bows, and I immediately do a base of closing fire. However, devastating charge infantry on a +3 vs my combat shy bows will hurt, lots! 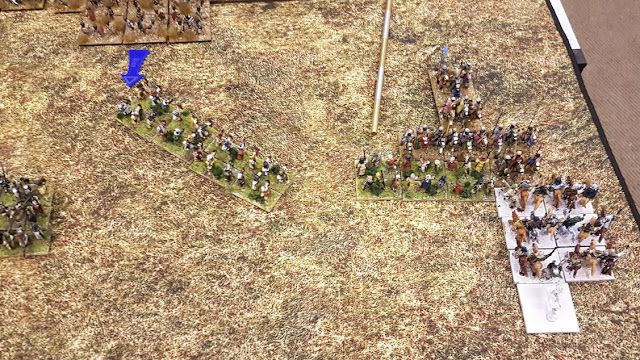 My camalry charge, and marmalize a flexible unit in skirmish (+1 superiors, +1 camels, +1 short spear, +1 devastating charge, +2 fighting skirmishers, +1 enemy unit shot), the results were not pretty! My other camel unit tries and fails to achieve a flank charge on Neil's front line, but being camels should hold out well. (2-0) 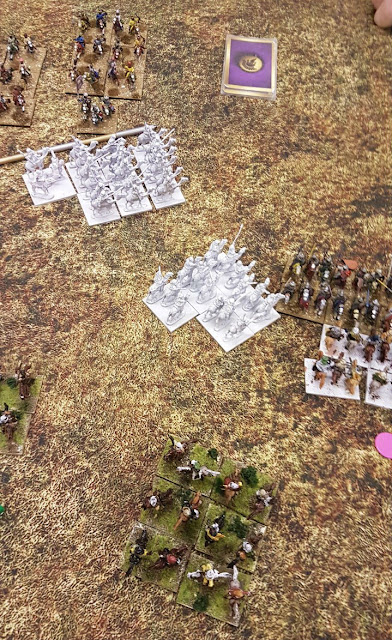 Denouement! Neil reformed his other two skirmishing flexible, and smashed one into the flank of average camels, who survived with only a wound and a base lost, then turned to face, yummy! However, things are not going well elsewhere, 1 of my ordinary cavalry cannot beat the superiors to their front and breaks, as does my superior guard unit, despite being up in both impact and melee, my dice are pants! (Queen Amina takes a wound and is no longer legendary, retires to the rear.) (2-4) 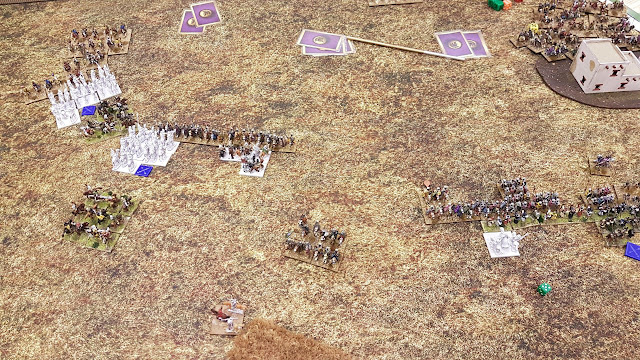 My spears and bows both evaporate under Neil's assaults. Superior cavalry against unprotected  long spears  with a general is a hard slog, especially when your opponent then brings in protected long spears too! The bows because being unprotected and combat shy vs anything but, the +2 is not good for your health! Outnumbered and out classed is never good for long term survival... (2-8)

In the last turns, my skirmishers sneak round the back and take a cheeky javelin shot on the flank of the engaged cavalry, which breaks a superior cavalry unit (not bad on black and white), and the KaB on the next door unit (both down to 3/6 bases) caused them to disintegrate too! (6-8)
At this point, I break on 12, Neil on 8, err, could be good.
Except...
My second foot archer unit and my spear armed bows both die. Ouch! I go down (6-15) and a crushing victory to Neil! His deadpool is behind the village. He had a lot of hard units that had taken a large amount of damage, but not as many as me!!!

Another great game, and Neil said he enjoyed it and would like to try it again. I will be redrafting the army, maybe losing one of the skirmishing cavalry and adding another foot unit, maybe... Or not...