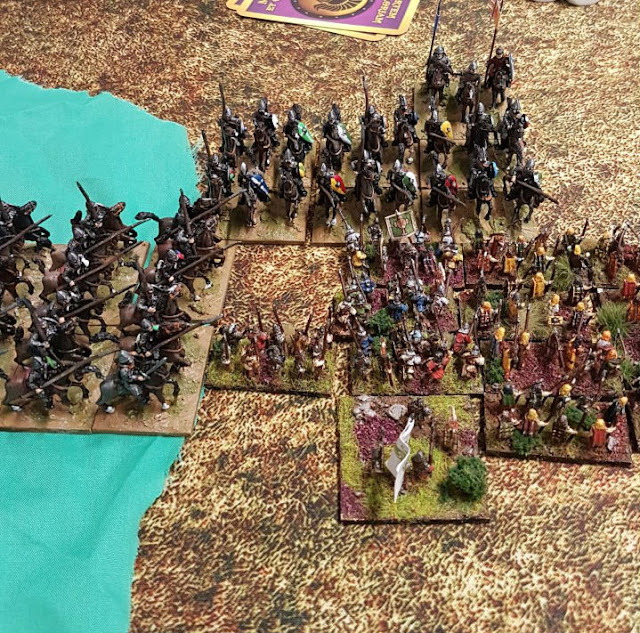 Nick wanted to try out a Dark Age force for The Age of Inadequate Lighting that I am running at the fabulous Boards & Swords in Derby in October. I only have one list from the 'Early Medieval' section of MeG, my Early Scots, so successful, so far, so when Nick arrived with a Norman force, we were on for a historical match.

The terrain was open, with me attacking, Nick is working on some posh stuff, before anyone complains about his cloth. Two pieces of cavalry friendly magic terrain, and a wood. His dinner was fish, chips and mushy peas.

Deployment, we both chose to avoid the wood, but Nick was obviously planning to use the cavalry friendly magic terrain for his knights to pile through, whereas my close formation Scots would be massively disadvantaged in, so we skirted (kilted?) around it.

My Viking allies (really Anglo-Danish, under Edger Aetheling) show how much they hate their oppressive occupiers by immediately going on the offensive. (If you get black and white cards on turn 1, with an ally, they become unreliable). 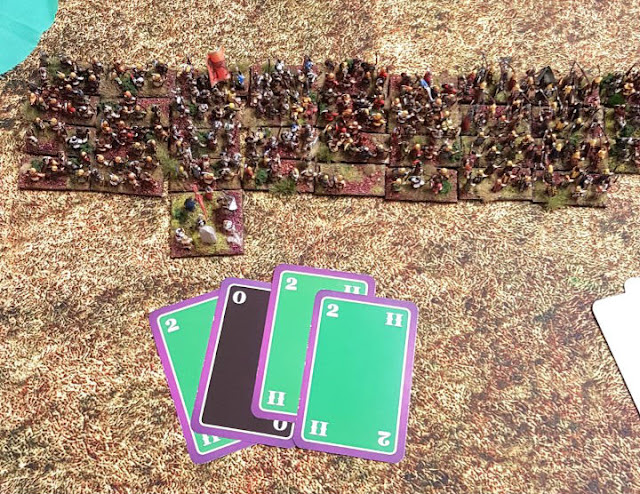 End of turn 1, my cavalry has advanced full speed with the intention of pinning Nick's better, and more numerous horse lords. My foot plugged the gap between terrains, while Nick swung his army wide to find my flanks.
Centre, what centre?

Crossbows move up in support as my cavalry falls back, Nick swings superior household milites round. 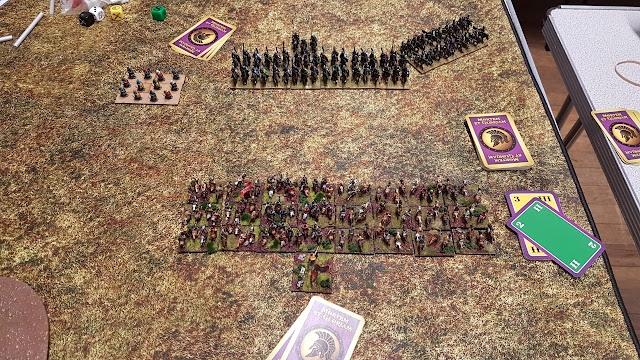 In the not centre, my hordes push forward en echelon. Nick split his split forces, and chaos theory began. 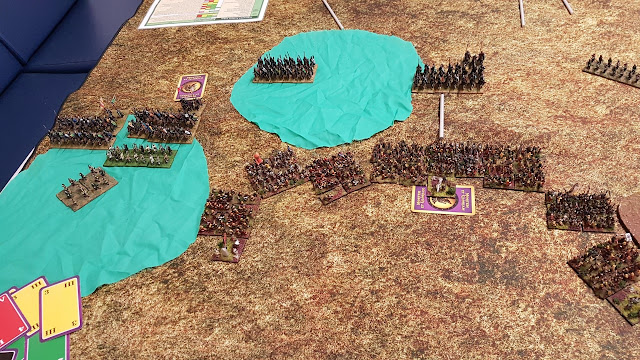 Another fallback... I had to buy off a shooting wound too.

Nick follows up, I'm now in a spot where he can't get immediate overlaps or flanks. On the left, a unit of superiors goes crossbow hunting. 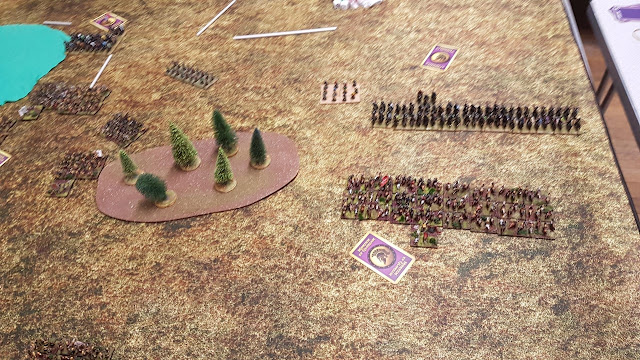 I turn my left hand vikings to face the approaching flank threat from bows and cavalry, but being careful not to set foot in the rough.

I'll get there eventually, honest! 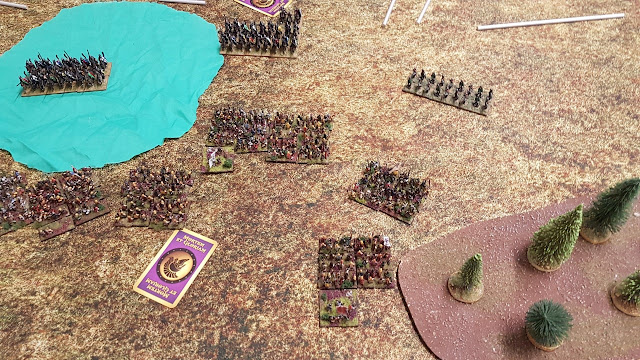 After an hour and a half of cagey playing by both sides, contact is made.
I didn't want to give Nick an opening, while he looked for an opening! Nick's cavalry is triggered to charge (2.99999999etc base widths away becomes an auto charge range for lancers, unless you pay to hold them). On the way in, my cantabrian armed light horse get three green against one of his units, causing a skull and a wound. Makes life easier as he is much better than me on the charge! I had deployed deep, compared to Nick's width, to try to minimize impact casualties, as if I survive I equal him in melee. 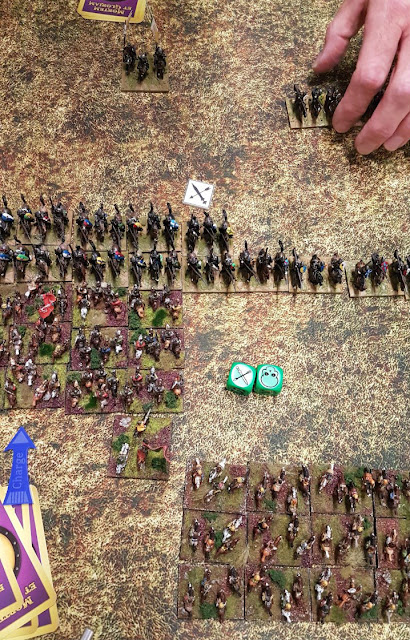 And survive we did, I lost two bases, and missed Nick, apart from a wound. My left hand unit only has short spears (+1) compared to his devastating charge, charging lancers (+3). Phew! 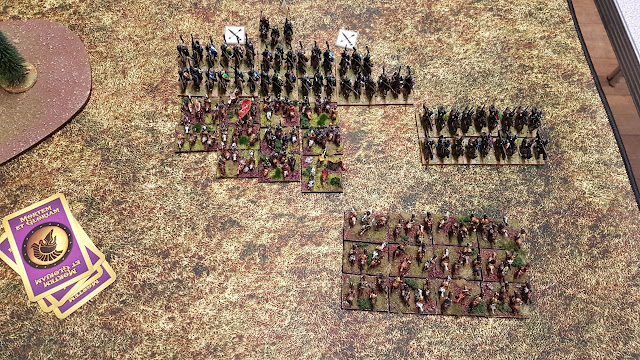 Melee, and my commander is caught up fighting, so expanding my left hand unit was not really possible as it costs an extra card (both cavalry commands on this flank had been cursed with bad cards all game). The evenly matched Norman knights both expanded, trying to find each others flanks, but my mounted warriors were stuck.
Didn't matter when you out roll your opponent though! 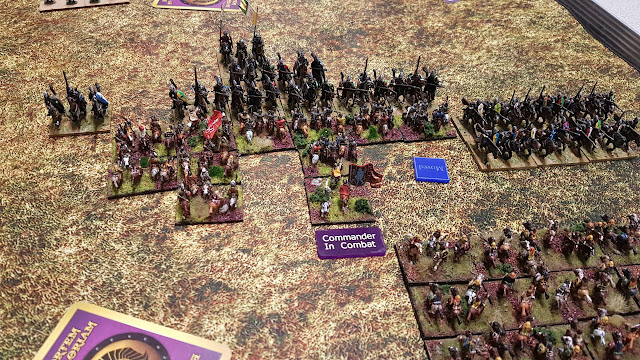 Didn't like that wound anyway, so I bought it off! 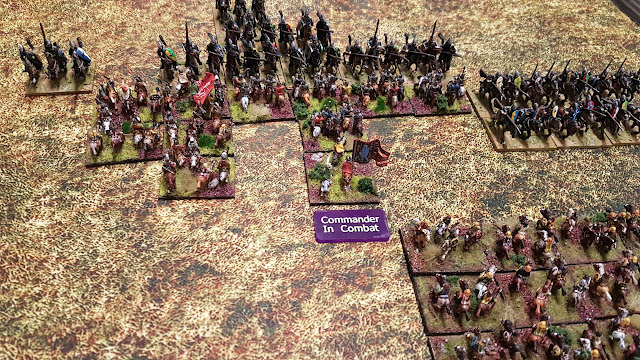 Nick's superiors milites charge my light horse, who spectacularly fail to achieve their goal and are caught and munched by Nick (0-2, you get 1 point for each unit of skirmishers). This also leaves the rear of my cavalry exposed in two turns time! 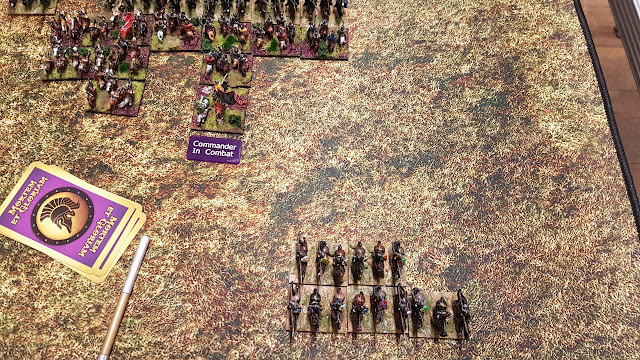 Back in the not-centre, Nick, knowing I was not coming into the rough to fight him, catches my superior warrior unit in the flank (there is no frontal contact, yet), and kills two bases on the charge (to be honest, I got away lightly with that one).

Back on the cavalry flank, my knights broke his, and forced a Kill A Base test on his beaten up knights facing my mounted warriors, who were very fragile by this point, which also broke them (4-2). This could easily have gone Nick's way, but I got very lucky. The fight was right next to the discard pile! 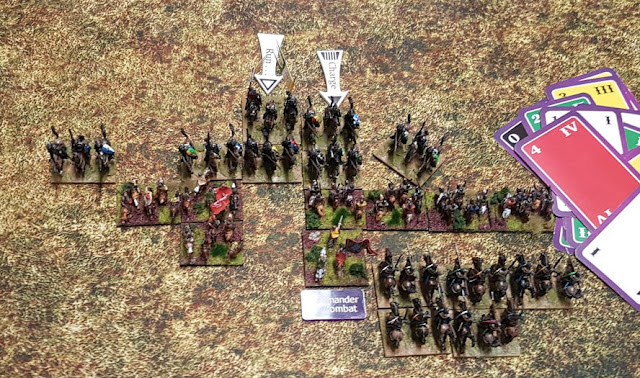 And in routing him, it pulls my cavalry well out of charge range of his returning Milites. 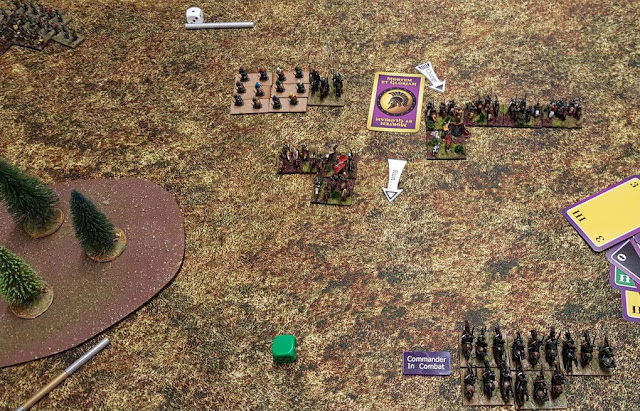 In the centre, my flanked unit and friends were dealing damage to his knights, but my superior unit was one hit off breaking. My Vikings had been effectively nullified by Nick holding the terrain and trying to get round my flank, it was effectively a staring match. I had contacted his crossbows with my other superior foot unit, and was slowly grinding them away, when we called it a night at 6-4.

A tough, cagey game, both of us were feeling for the opposition's strengths and weaknesses, and the terrain really hampered me, but as usual against Nick, a great laugh and a good fight.

Nick's comments: "Good write up. Glad to try my lot out. Difficult opposition with all of those shield walls. I made a few mistakes I command structure, deployment and moves - well on just about everything really. The army  has been rejigged for Derby, although there's also Plan B!"